Some of us saw this trend developing for a long time. Others were blindsided by it.

On one side, we have thugs with a very self-serving view of the world, and their role in it. On the other side, people who like to stick pins in ballooning egos.

Conflict was inevitable. But the WAY in which the conflict developed actually proves the point of the guys with the pins. The result we are seeing is irrational people, angry that anyone dare oppose them.

When Sony made a reportedly second-rate film mocking North Korea’s “Mere Leader”? He put on a show reminiscent of a “Bond” villain (or maybe Fat Bastard from “Austin Powers”). The despotic thug that can’t scrape together enough cash to feed his own people could somehow bankroll a cyber-attack on Sony…?

“Mere Leader” used hired guns to attack a private company. He went on to make bold (and foolish) declarations — like saying he would target “all the citadels of the U.S. imperialists who earned the bitterest grudge of all Koreans”.

We see France’s equivalent of The Onion shot up by other thugs. Why? The cartoonist “drew first”. Their tender egos were offended by a cartoon. To them, the correct response to an unpleasant idea is murder.

We’ve seen this before, too, when telling thugs something they don’t want to hear. Our rejection of their terms of defacto surrender brings their blood to a boil. Failure to submit brings a penalty they feel entitled — obligated — to impose on us.

Accept our traditions. Make allowances for our ways of life. Abandon your own traditions. Self-censure. Accept our taboos as your own. Or pay a price.

When people invoke an ideology before going on a killing spree, for instance, you’re seeing thuggery in action. When they are motivated by an us-and-them attitude that reduces other people below the minimum threshold of being viewed as fully human, when their life becomes cheap, and disposable, or it seems you are doing the world a favour by killing them, this is thuggery in action.

Thuggery, as I’m using the term here, is attacking other people to force them to think or behave differently.  This is the precise opposite of engaging the ideas of someone you disagree with. The “weapon” of choice for attacking ideas, of course, is words: things like questions, evidence, or rebuttals.

Paris and Pyongyang have their thugs. So did the very, very long list of “martyrs” lining up to shed blood in countries around the world. Attacking embassies (an act of war), demanding the death of an author critical of Islam, murdering a filmmaker for his documentary about mistreatment of women in Islam.

You may think that I’m singling out Islam.  They deserve their share of criticism, certainly. But thugs aren’t just found there. (Although they have been some of the more aggressive offenders.) There are other kinds, too.

It’s trite and easy to blame “religion” for thuggery. But in reality, most religions (Christianity among them) don’t sink to that particular evil except when they become a (secondary) means to a (primary) political end.

It could be argued that even Islam’s militant factions are being as much politically motivated (to have Islam dominate) as they are religiously motivated (in the Western understanding of both terms).

You might as easily blame politics (specifically, its power coerce and control others) of being the energizing force of thuggery.

When the President stands up at the UN, with his “future does not belong to those who slander Islam” speech, throwing some scapegoat under the bus, and into jail — knowing full well, that he had precisely nothing to do with events in Benghazi — that is thuggery.

When talking heads find volatile situations, with social unrest bubbling over, and whip the crowds into a violent frenzy, that is thuggery.

When immigration laws are ignored for millions, by the government that tried to deport a single homeschooling family — that was ALREADY AWARDED political asylum by a judge — that is thuggery.

When activist groups and social engineers use laws and courts to destroy private businesses — simply because they’re owned by people whose values they disagree with — that is thuggery.

Thuggery is the coward’s way out. It is destroying a person to “win” the argument by default. It’s ugly in conversation (even in its minor forms, like passive-aggression). It’s ugly in crowds. It’s ugly as a tool of persuasion. In politics and political ads. In debate. In legislation. In law. Really — it’s ugly everywhere.

What is the alternative? The better way?

The way the West prefers lines up with a Biblical imperative. In 2 Corinthians 10:4, we see a model for how to interact with hostile worldviews.

Paraphrasing, it says that we don’t engage in a physical conflict with the other guy, but we fight to overthrow the hostile idea itself. (Which is compared to a fortress.) Overthrow the idea, and you have won the person, without either party needing to be “destroyed”.

And now, we are ALL the poorer for it. 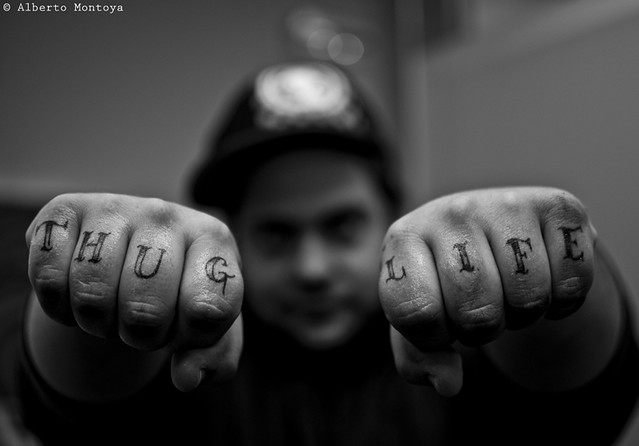