Thoughts on this? Do you think this was necessary or too much?

Upset about a recent police-involved fatal shooting of a family’s pit bull, a pair of activists video recorded themselves walking into a police station in Jackson, Mississippi, openly carrying an AR-15 semiautomatic rifle to file a Freedom of Information Act request.

Reactions to the video, uploaded on Dec. 10, so far have run the gamut, with some supporting the activist and others criticizing him due to the perceived spike in threats to police officers recently.

The men behind the JacksonCopBlock and TacticalPatriot YouTube channels are apparently seen entering the Jackson Police Department with intentions of interacting with law enforcement. One of the men is seen openly carrying an AR-15 rifle and wearing an apparent bulletproof vest with “Jackson Cop Block” printed on the back. 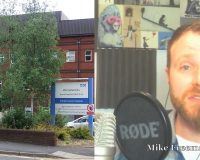