Is there anyone who is as shameless as Hillary? Besides Obama, probably not.

Democratic presidential front-runner Hillary Rodham Clinton twice refused to apologize on Friday for her politically disastrous choice to keep sensitive emails on a private server when she was secretary of state, saying only that she was ‘sorry that this has been confusing to people.’

In just her third televised interview since launching her second presidential bid, Clinton told MSNBC reporter Andrea Mitchell that she regretted her actions had ‘raised a lot of questions, but there are answers to all these questions.’

Asked specifically if she should apologize – ‘Are you sorry?’ – Clinton punted to language she has used before on the campaign trail.

‘I take responsibility and it wasn’t the best choice,’ she said, adding in a lawyerly fashion that ‘I now disagree with the choice that I made.’

‘I did all my business on my personal email [in the Senate],’ Clinton said. ‘I was not thinking a lot when I got in [as secretary of state].’

‘There was so much work to be done. We had so many problems around the world. I didn’t really stop and think, “What kind of email system will there be?”‘

‘This was fully above-board, people knew I was using a personal email. I did it for convenience,’ she said. ‘I sent emails that I thought were work-related to people’s “dot-gov” accounts.’

Biden To Reporter: Are There Republicans Who Think We’re Sucking The Blood Out Of Kids? (Video)
Conservative Firing Line 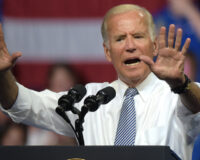 Joe Biden’s Town Hall was a Huge Bust in the Ratings
July 24th, 2021 Flag And Cross

You’re more likely to be murdered in Chicago than be hospitalized for Covid19
July 23rd, 2021 The Joe Messina Show