All this for a Canadian Prime Minister?

It’s probably because the new leftist leader in Canada is Obama’s Mini-Me. 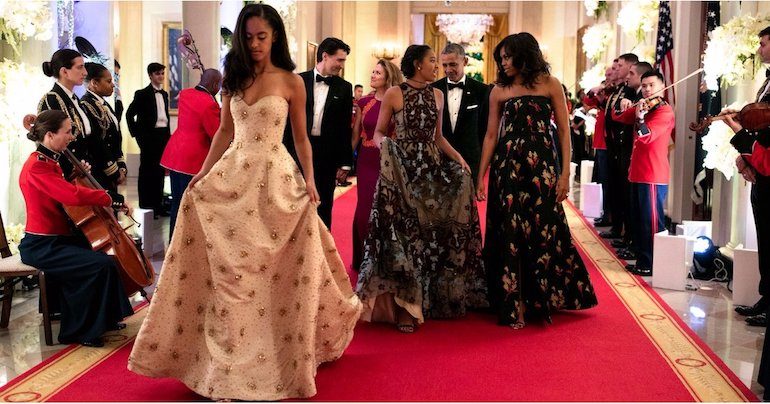 If Trump becomes President, I seriously doubt Ivanka will waste the taxpayer’s money on a ridiculous frickin’ $20,000 dress.

For the first time since being elected, Canadian Prime Minister Justin Trudeau visited the United States. The “quite good-looking Canadian delegation” was welcomed to Washington, D.C., by President Obama and his family with a state dinner at the White House. But the event wasn’t just a first for Trudeau — Sasha and Malia Obama made their state-dinner debut as well.

“When I was first elected to this office, Malia was just 10 and Sasha was 7. And they grow up too fast,” the president said during his opening remarks at the event on Thursday night. “Now Malia is going off to college. … And I’m starting to choke up.”

What might have also made Obama choke up was looking at the price of his daughters’ dresses. While their mother opted for a custom strapless number from one of her favorite designers, Jason Wu, her daughters went with Naeem Khan. Malia, 17, who was seated next to Saturday Night Live’s Lorne Michaels and actress Sandra Oh, wore a strapless faille gown with crystal beading from the pre-fall 2015 collection. The 100 percent silk piece is no longer available for purchase, but it originally retailed for $17,990. The embellished piece didn’t need any more bling, so she went without jewelry. Malia blew out her hair in loose waves and had a subtle cat eye and nude lips.

While Malia went for a more classic, elegant look, her younger sister added a young, fresh flair. Also in Naeem Khan, Sasha chose a look from the Indian-American designer’s resort 2016 collection, a gown embroidered with allover threadwork, beading, and appliqué, accentuated by a fitted bodice and ball skirt. The 14-year-old complemented the red, black, and sheer piece, which retails for $19,990, by styling her hair in Dutch braids and tying a thin ribbon around her neck as a choker.