Had William Wallace roared his deathbed defiance — “Freedom!!”– not before a jeering, English mob, but instead atop Detroit’s Cobo Center, I’m pretty sure Mel Gibson’s 1994 masterpiece Braveheart wouldn’t have packed quite the atmospheric sizzle it did.

Oddly, Gibson came to my mind while I was reading an excellent piece by Veronique de Rugy outlining the grisly, economic collapse of the Motor City:

— Once the fourth most populated city in America, Detroit currently claims less than half its former peak residency.

— Its unemployment rate is double the nation’s (11.6); half those who call the city home don’t work.

— Per capita income? Half the national average; (notice: “half” plays a noticeable, unwelcomed role in Detroit).

— Motown is the country’s poorest municipality: 40% of its denizens live in poverty.

— … and it’s among the United States’ most dangerous cities.

So, what does all that have to do with Mel Gibson? A simple but historically formidable concept: the inevitability of change.

Detroit, previously classed with the planet’s economic and cultural crowned jewels, is now a global joke, in many cases literally disintegrating, surviving by-the-finger-nails.

Mr. Gibson, indisputably one of the most recognizable, influential, commercially and artistically successful players on the movie scene a decade ago, following screeching personal scandals is lately reduced to cameos in other superstars’ vehicles (The Expendables 3) or performing in little seen or straight-to-video type projects (Get the Gringo, Machete Kills, Blood Father).

The bleak experience of the erstwhile “Automotive Capital of the World” and of this controversial American-Australian actor/director/producer provides a high-profile demonstration of an ineluctable, often unpleasant reality: all parts of life, huge or trivial. are fluid; they won’t forever stay the same.

Years ago, a travelling preacher I enjoy quipped something like, “Everybody likes to talk about change, but nobody wants to change.” True enough, despite millennia of human example which ought to caution us otherwise, manifold millions of souls manage to delude themselves — if only subconsciously — the “best” parts of their lives will remain unaltered.

Detroit and Gibson send the message: Don’t count on it.

That heads up, thankfully, provides opportunity for the foresightful to prepare for inescapable change; to manage it with as little loss and avoidable blow-back as possible. The heedless, mind you, will benefit not one iota from the be-ready-for-change signal flares blazing right in front of us.

The prudent man foresees evil, and hides himself; but the simple pass on, and are punished — Proverbs 27:12.

Some suggestions for skillfully negotiating the mercurial nature of living:

— Be willing to change. Expect it. Embrace it when – inexorably — it shows up.

For everything there is a season, and a time for every matter under heaven … Ecclesiastes 3:1.

I had a friend who developed what could be labelled a … turbulent work history? Multiple jobs, an occupational path splintering into kaleidoscopic directions over many years; impressive successes, harrowing plunges. But one thing stood out at every apparent set back: he snapped-to at each occasion, moving on purposefully to whatever was next; and always seemed to land on his feet, both financially and professionally.

Change didn’t seem a particular surprise to him; so he was able to face and survive it.

— Take conscious steps to prepare for change – before it intersects your path.

He who gathers in summer … acts wisely, but he who sleeps in harvest … acts shamefully — Proverbs 10:5

Consider [the ant’s] ways, and be wise: Which … Provides her meat in the summer, and gathers her food in the harvest — Proverbs 6:6-8.

Say what one will about the recklessness of Mel Gibson’s past, his wealth remains dizzying, even by Hollywood’s opulent standards. Judicious investments and career decisions before, during and after his salad days endowed him with a current, estimated $600 million net worth.

That kind of detail can ease the sting when one’s prospects take an otherwise challenging downturn. At the very least, it lays a nice fallback position.

I’ll never forget a television interview several years ago with Chuck Norris. After the martial arts champion/actor/author reviewed a litany of his variegated activities, including a number or income-producing irons in the fire, one of the program’s hosts exclaimed, “Diversify, diversify, diversify!”

That exchange stuck with me. Prudent folks, you see, sharpen and leverage the full spectrum of their talents, expanding opportunities and options for come-what-may.

[W]e know what went wrong with Detroit. It put all of its eggs in one basket: … Detroit was a one-industry town, dominated by three huge companies, which employed hundreds of thousands of workers with too few transferrable skills. When the industrial juggernaut withered away, there was very little left for its low-skilled population.

For a person? A city? That’s not an arrangement well-suited for the arrival of unforgiving change.

— Shun anything which will aggravate already disagreeable circumstances.

The foolishness of man ruins his way, And his heart rages against the LORD — Proverbs 19:3.

One of the most fruitful lessons I’ve garnered: As bad as any constellation of conditions can be, it can always worsen — depending significantly on individuals’ responses to mishaps, disappointments, reversals.

Not a few of Mel Gibson’s recent woes? Self-inflicted, as he’ll readily admit.

Where Detroit has stubbornly doubled-down on policies that ushered in its present forlorn state? Its wretchedness has waxed more severe. “Making things worse [there] … overspending, overtaxing and overregulation … That approach failed — as it always does,” (de Rugy).

Answering life’s vagaries with pig-headedness will eventually exacerbate them; every time.

— Prioritize the ONE THING we’re promised won’t change: the “kingdom [of God] which cannot be shaken”. (Hebrews 12:28)

At the end of this age’s parlous transitoriness, the righteous in Christ will hear the only pronouncement which ultimately matters, from the God who “do[es] not change” (Malachi 3:6): “Well done, good and faithful servant.” That’s the only unshifting “anchor” in a world churning uncertainly around us every day (Hebrews 6:19).

Point of fact, it’s often necessary and, in the long run, beneficial. In the teeth of dejection and despair, change can bring the possibility of hope.

The entertainment industry is lately buzzing about Gibson’s Hacksaw Ridge — a much-anticipated, big-screen release, his first major film in five years. Additionally, there’s serious chatter about a Gibson-helmed sequel to his magisterial The Passion of the Christ, which will treat the Savior’s resurrection – and could resurrect the actor’s fortunes.

Meanwhile, Detroit just recently emerged from a bankruptcy process; and some economists are beginning to pipe a bit about hints of a building Motor City resurgence.

A once-illustrious city, a seesawing celebrity underscore: change — sometimes dreadful, sometimes neutral, sometimes advantageous — is stalking all of us.

Who’ll be ready to meet it? 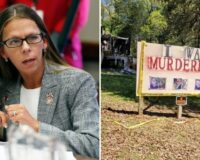 When The Criminals Set The Precedent: President Regan’s Would Be Assassin John Hinckley Jr. Wants His Due!
June 15th, 2021 Sons of Liberty Media