A man shoots and kills 5 people in a busy airport and the story is dropped in less than a week. Isn’t that weird? 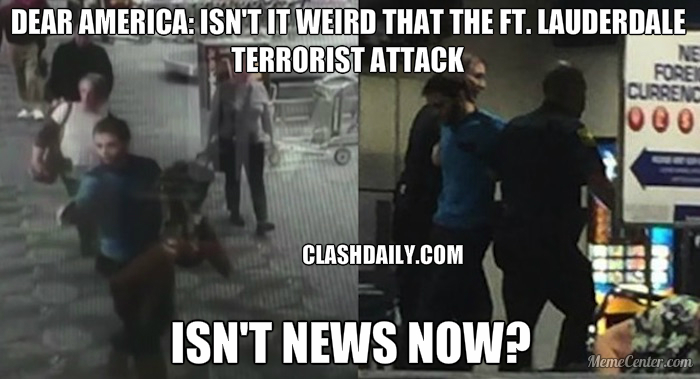 I wonder why that could be…

The Ft. Lauderdale Airport shooter is a Muslim convert who years before joining the U.S. Army took on an Islamic name (Aashiq Hammad), downloaded terrorist propaganda and recorded Islamic religious music online, according to public records dug up by the investigative news site of an award-winning, California journalist. This is pertinent information that the Obama administration apparently wants to keep quiet, bringing up memories of the Benghazi cover up, in which the president and his cohorts knowingly lied to conceal that Islamic terrorists attacked the U.S. Special Mission in Libya.

Information is slowly trickling out that links the Ft. Lauderdale Airport shooter to radical Islam while the official story from authorities is that the gunman is a mentally ill, Hispanic Army veteran named Esteban Santiago that became unhinged after a tour in Iraq. Only one mainstream media outlet mentions the possibility of Santiago’s “jihadist identity,” burying it in a piece about New York possibly being his initial target. A paragraph deep in the story mentions that investigators recovered Santiago’s computer from a pawn shop and the FBI is examining it to determine whether he created a “jihadist identity for himself using the name Aashiq Hammad…” The rest of the traditional mainstream media coverage promotes the government rhetoric that omits any ties to terrorism even though early on a photo surfaced of Santiago making an ISIS salute while wearing a keffiyeh, a Palestinian Arab scarf.

The public records uncovered in the days after the massacre suggest Santiago (Hammad) is a radical Islamic terrorist that’s seriously committed to Islam. Besides taking on a Muslim name, he recorded three Islamic religious songs, including the Muslim declaration faith (“there is no God but Allah and Muhammad is his messenger”) known as the Shahada. He also posted a thread about downloading propaganda videos from Islamic terrorists on a weapons and explosives forum. The investigative news site that unearthed this disturbing information connected the dots between Santiago, who is of Puerto Rican descent, and Hammad, an identity he created in 2007.
Read more: Judicial Watch

Yessir, it sure is strange.

And frankly, disrespectful of the 5 that were murdered and the many that were traumatized by the event.

Not one of us will ever be the same in an airport again.