Oh, the left outrage at anyone around President Trump… or anyone who is a Republican for that matter.

If you look at his tweets, it appears as though Joss Whedon has suffered from some sort of a breakdown…

Remember, it was Joss that had the ‘Avengers Assemble’ and put out that first horrible Anti-Trump ad.

Check out some of the crazy stuff he’s tweeted:

This is simple: Trump cannot CANNOT be allowed a term in office. It’s not about 2018. It’s about RIGHT NOW

Joss recently picked on Nicole Kidman for saying that Donald Trump is now the President and should be supported:

And this gem about Speaker Paul Ryan:

Violence solves nothing. I want a rhino to fuck @SpeakerRyan to death with its horn because it’s FUNNY, not because he’s a #GOPmurderbro

That’s some kind of unhinged.

It’s funny that the Left is always screaming about ‘Rape culture’ and then some crazy leftist says, ‘I wish a rhino would rape a Republican to death! Ha-ha-ha!’

Perhaps ‘rape culture’ is real among privileged white guys on the left… you may know them by their other moniker — assh*les.

It looks like his hate-filled tirades aren’t going to stop anytime soon. 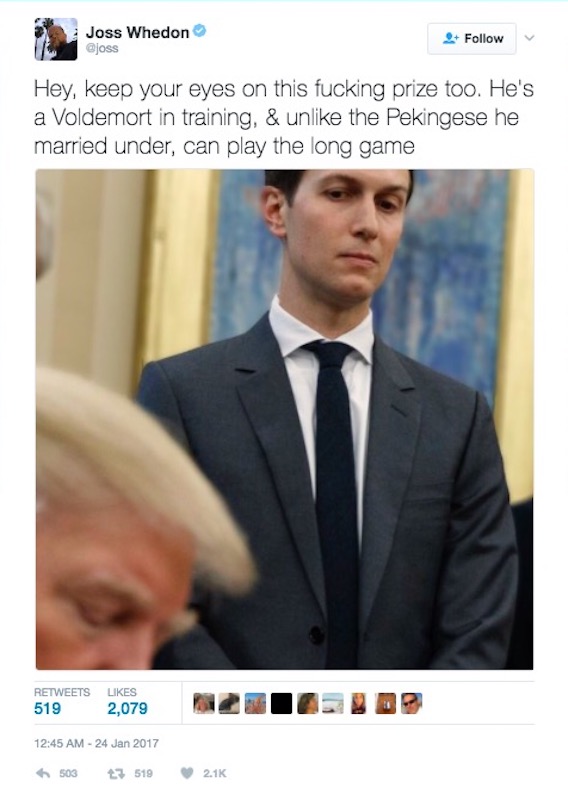 .@joss Jared Kushner is Jewish. Your vile anti-Semitism is noted.

@joss Just so we’re on the same page here. You just called Ivanka a dog because you don’t agree with Trump. Classy.

@joss wow calling his wife a dog? I guess it’s OK to demean women as long as you don’t like them or their husbands, eh?

.@joss, are you okay? You seem to be coming quite unhinged. https://t.co/NA4EzFDCk1

@joss You know, if Kushner was a democrat and you were a Republican, you’d be labeled as anti-semitic /white nationalist for this tweet.

@joss Maybe next time just come out and say “bitch”. You ain’t fooling anyone with “Pekingese”. Is this how you fight for women’s rights?