They’ve spent Tens of Millions of dollars on vacation these last 8 years. Why so glum?

They came back from a 16-day vacation. In Hawaii. At taxpayer expense. And look sad.

The rented a house, hit the beach, played golf (of course!) enjoyed fancy restaurants. Visited an Islamic center, an escape room and the cemetery where his grandfather was buried.

… Throwing Israel under the bus at the UN.

… Nearly rebooting the Cold War. (Obama was called out as childish by a veteran CIA agent.

It’s been quite a vacation.

Even in his Christmas visit to the troops, he couldn’t resist making it about himself.

…visiting the US troops for a Christmas Day address at the Marine Corps Base Hawaii.

The president, in his classic manner, started off his speech was a joke about how he gets to keep some benefits after his term as Commander in Chief comes to an end.

‘I understand that I still have a little bit of rank as ex-President,’ Obama said. ‘So I still get to use the gym on base – and, of course, the golf course.’ —DailyMail

This is how they looked while stepping off Air Force One. 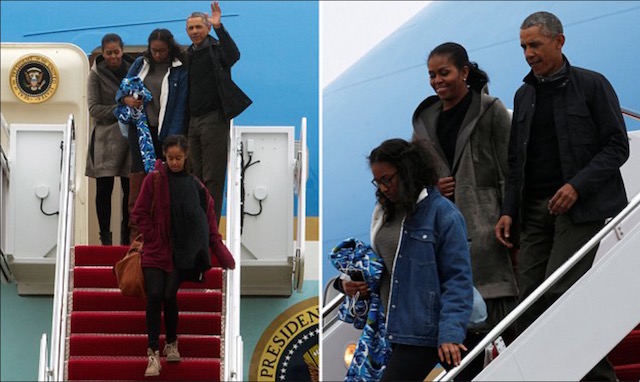 Maybe they’ve awakened to the realization that these taxpayer-paid vacations are about to end.

How about you? Are YOU Sad for them, too?

The Obamas Look GLOOMY After Their Hawaii Vacation - Are YOU Sad They're Sad?

We’d say they’re about to go back to ‘real life’ but they’re a presidential family now, and that carries certain perks that never go away. Just ask Chelsea Clinton.

Don’t be such cry-babies, Obama family.