Well, you can find out on this channel now available on the YouTube Kids App.

Lindsay Ames, a Masters Student in Queer Theory, has created a YouTube Channel geared to preschoolers. The target age for the activist show is 3-5 years old.

Lindsay and her stuffed bear, Teddy, teach children about ‘What Gay Means’, Transgenderism, Marriage Equality, and ‘Unicorns are Queer Horses’.

Lindsay Amer is the creator of Queer Kid Stuff, a webseries starring Amer and her best stuffed friend, Teddy. Amer created the series to fill the gap in LGBTQ educational content geared towards young children. The idea came to her while searching for basic educational info for kids online.

Amer says, “I remember sitting down one day and just Googling ‘What does gay mean?’ and I was really surprised at the results that came up. Just a dictionary definition and a few resources for parents/teachers on how to explain it to kids, but there was nothing that was actually meant for kids.”…

…According to Amer, “Kids are the future, plain and simple. If we want to create a more diverse and inclusive world for ourselves and generations to come, we need to educate young people properly to de-stigmatize LGBTQ+ identities.”…

…It’s pretty adorable, from the stop-animation opening song to the friendly playroom-styled set to Amer’s delivery of educational content in a fun, accessible way with chalkboard illustrations. There’s even a clever joke about bears! For the webseries, Amer says she is “really looking to approach the topics I’m dealing with from the child’s perspective.”
Read more: Autostraddle

James Michael Nichols, Queer Voices Deputy Editor at Huffington Post, was giddy with excitement. Check out an excerpt from his article titled, ‘This Incredible New Project Is Explaining LGBT Themes To Preschool Kids‘.

“These are the years of the W’s: Who, What, When, and Why,” Amer told The Huffington Post. “These ages are when children are learning and soaking up everything they can about the world they were pretty recently introduced to. While they are learning about the world, they are also beginning to form their own opinions about the things in this world. If they aren’t seeing queerness in their world (particularly in their media) how can they know to ask questions and spark conversations (as many parents won’t do this themselves). And what happens if the first time they are introduced to a queer topic, it has a negative connotation? As soon as that happens, it is far more difficult to undo that moment, than it is to simply introduce the topic truthfully and positively first.”

We’re super excited about this project and can’t wait to see what’s ahead. Check out the first episode, “What Does Gay Mean?” above and head here to learn more about “Queer Kids Stuff.”
Read more: Huffington Post

‘Parents won’t do this themselves’? Yeah, there’s a reason for that.

You don’t sexualize children. That includes introducing them to adult topics before they are cognitively ready for them.

We also take issue with Ames handling the topics ‘truthfully and positively’.

Saying being ‘bisexual’ is the same as liking both apples and bananas is ludicrous!

Is it really that bad?

Here’s a sample of the downloadable worksheets for kids: 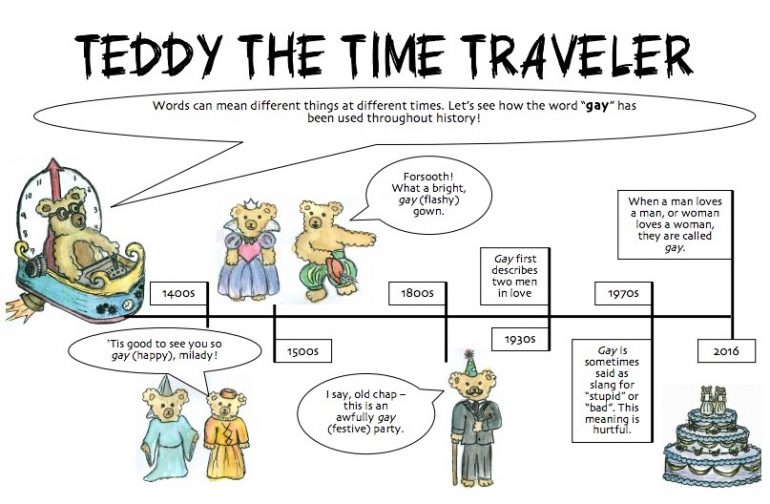 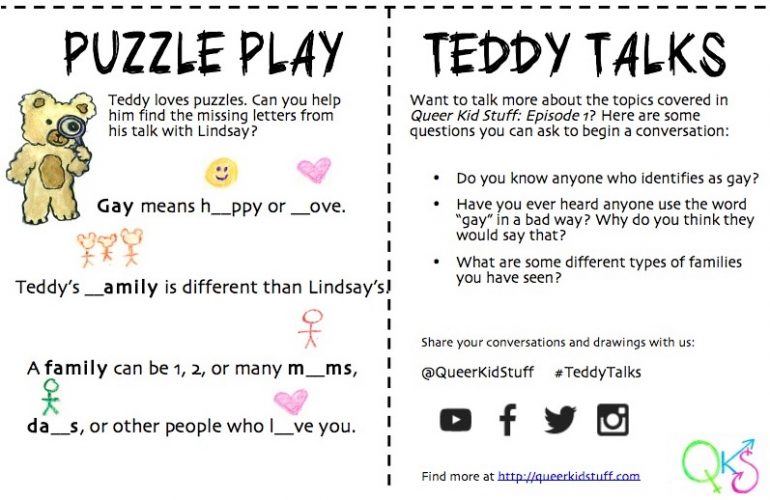 It’s blatant propaganda aimed at very young children. Children who are immersed in a world of make-believe and fantasy and reality are often muddled in their minds. These kids don’t have the ability to comprehend complex ideas about sexuality.

Young children could easily confuse the Queer Kid Stuff video use of the word ‘love’ with the feeling they have for parents, siblings, family members, and friends.

If a boy loves his dad and his mom, does that suddenly make him ‘bisexual’? If you watch Ames’s video on bisexuality, that’s certainly the impression you’d get.

Watch Lindsay say, ‘Being Bisexual or Pansexual is really cool!’

Ames has taken her activism straight to kids bypassing parents. She claims to want to ‘encourage discussion’, but this is nothing more than brainwashing.

And she gets political, too.

Surprise! Lindsay Doesn’t like Donald Trump and says that President Trump and the grown-ups that voted for Trump can be mean. Because #LoveTrumpsHate:

Her twisted views on what is and isn’t appropriate to discuss with children come from her ‘education’. The underlying philosophy that drives Lindsay Ames is displayed in this video where she discusses whether ‘All Kids Are Queer’:

Ames has met with a fair bit of praise from other LGBTQQIP2SAA crowd, but she’s also received criticism.

Here is a tweet from Blair White, an openly Trans conservative YouTuber: 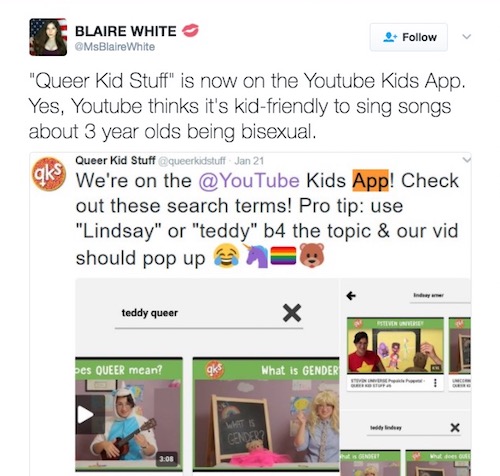 You can find lots of videos on YouTube from the LGBT crowd condemning Queer Kid Stuff as inappropriate for young children.

Ames also claims she is targeted by Neo-Nazis.

A wave of hatred crashed over me. It arrived slowly at first, then all at once. The nastiness started in the YouTube comments.

You wouldn’t know it from looking at my videos. It’s a kid-friendly channel, so I heavily monitor comments. I will not tolerate hate in the sacred space I am working so hard to build. The sacrifice I have had to make in order to protect that space is that I must comb through and delete every single negative comment manually. I must read when people hurl “faggot,” “dyke,” “pedophile,” and my new favorite, “kike,” in my direction. I’ve come to see this task as a matter of personal safety. I read every comment to make sure there aren’t any death threats letting me know I should call the police — or the FBI (my dad’s personal preference).

After the YouTube comments, tweets started rolling in. Horrible messages targeted both the @queerkidstuff handle, as well as my personal twitter account. I was at least somewhat prepared for the homophobia. But I was unpleasantly surprised by the rampant anti-semitism. I saw a few “hail Hitler”s and many confederate flag/Donald Trump/Hitler avatars. These attacks felt far more personal, attacking my heritage and identity as a queer Jewish woman…

…I’m going to let you in on a little secret. The joke’s on them. My videos are monetized. I get roughly a dollar for every thousand views. I literally have a penny for every name they called me. Their hate is putting money directly in my pocket. And that’s truly how I sleep at night.
Read more: Business Insider

So, here’s a ClashDaily Tip:

Watch what your kids or grandkids are watching on the YouTube Kids App. If you come across Queer Kid Stuff, now you know what it is and you can avoid it.

If you watch it and ‘troll’ her, you’re essentially putting money in Lindsay’s pocket to make more videos.