Linda Sarsour, the Sharia-loving, Muslim Palestinian ‘Leader’ of the Women’s March spoke at a protest outside the White House Wednesday. She had a LOT to say…

ClashDaily covered when she tweeted that Brigitte Gabriel and Ayaan Hirsi Ali should ‘have their vaginas taken away’ because they ‘don’t deserve to be women’.

We’ve said it before, Linda Sarsour is a vile, pro-Sharia ‘feminist’ oxygen burglar.

She’s filled to the hijab with hate and vitriol.

Her latest thing was calling President Trump and Benjamin Netanyahu ‘bigoted peas in a hateful pod’.

And then she said that Bibi isn’t welcome in America.

But honey, I thought we were supposed to open our borders to everyone… isn’t that right?

I mean, you’re not suggesting ‘vetting’ certain undesirables — like Jews — out, are you?

That would be Anti-Semitism.

.@lsarsour now in front of the White House: Trump & Netanyahu are two "bigoted peas in a hateful pod." pic.twitter.com/jK6dXjf2Lz

Sarsour doesn’t seem to remember that she’s in America.

She says that she ‘stands for justice and compassion, dignity and respect for all people’ — except President Trump and Prime Minister Netanyahu.

And why does she hate them so much?

Because they want Israel to continue to exist as a democratic Jewish nation?

Because unlike some pro-Sharia states, they don’t believe in the complete eradication of the Jewish people?

When Israel became a nation, the founder of the Muslim Brotherhood had said that if a Jewish state became a reality, the Arab people would ‘drive the Jews in their midst into the sea’. And they don’t seemed to have backed off on that promise.

So, you can see, dear Readers, how it’s so hateful and bigoted to want Israel to continue to exist. 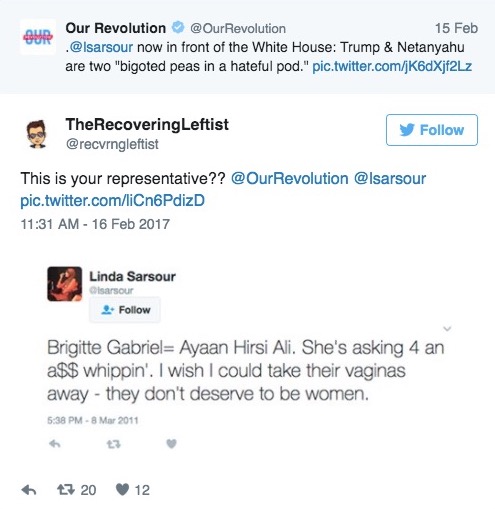 Boy the left sure knows how to pick their role speakers. https://t.co/NjMvdE7fyR

@redsteeze She knows bigotry. She is one.

@redsteeze Only one side is calling for the elimination of a Jewish state crazy lady.

Speaking of Twitter reminders — this one by Sarsour herself is a doozy:

"We can disagree & still love each other, unless your disagreement is rooted in my oppression & denial of my humanity and right to exist."

But Sarsour doesn’t think it’s relevant if you’re talking about the ‘Two Bigoted Peas in a Hateful Pod’.