How far left have the crazies gone? So far that THIS guy is ‘normal’ now.

The irony is, they’ve gone so far Left that they’ve made a famously political (Left, of course) sitcom completely obsolete.

Some of you are too young to even to remember the reruns. And you won’t get the joke.

Let’s get you up to speed.

In the Seventies, there was an anti-war comedy that was absolutely HUGE. The final episode set records. It was called MASH.

The writing was really quite funny. It was a story about a Medical center in Korea. Not at the front lines, but they would get the wounded brought in by helicopter.

If you were to sum up the overarching theme of the show in three words, it would be ‘War Is Hell’. Really it was anti-war propaganda, dressed up as a sitcom.

One of the characters was DESPERATE to go back to America and was looking for ways to game the system. He couldn’t just LEAVE. That would be desertion. But if he could convince his officers that he was CRAZY they would HAVE to send him home.

So Klinger’s big plan to prove he was crazy was to wear women’s clothing all the time. And carry a purse. And wear pumps. And a fancy hat.

He looked, in a term that wasn’t used this way yet, 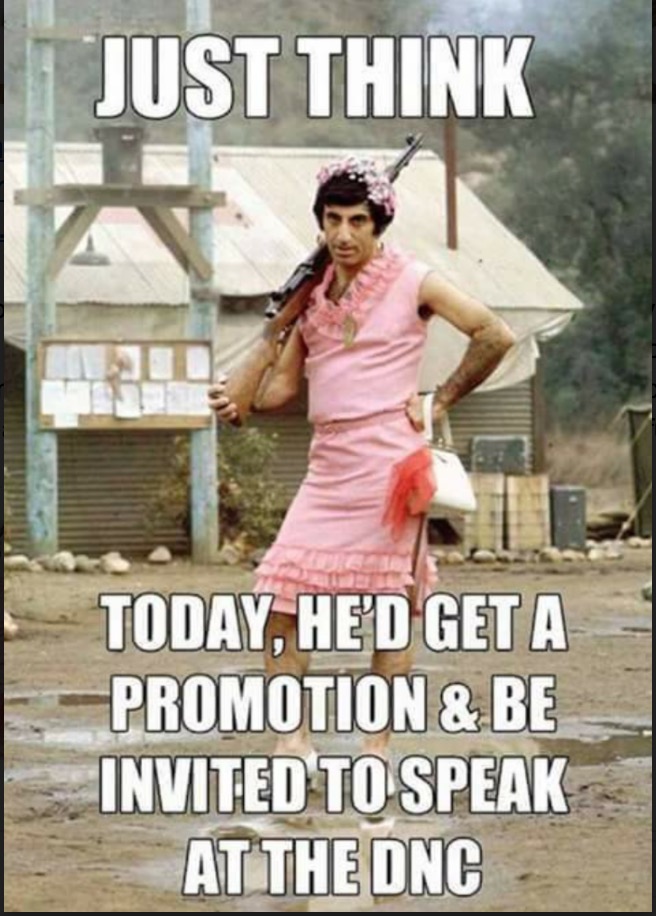 Today that would be sexist. Or homophobic. Or whatever stupid ‘triggered’ language would be invoked. (Don’t even get me STARTED about why they could NEVER remake ‘Three’s Company’ today.)

We can’t even tell Leftist anti-war propaganda jokes anymore without triggering some snowflake with a chip on his (?) shoulder.

There IS no ‘finish line’ for these people. It’s a constant march to the endless horizon of asininity.

And the weirdest specimens get speaking tours for their ‘bravery’.

Today’s goalposts are tomorrow’s Fifty-Yard Line. Do NOT be deceived about that.

And when the dust has settled, even the LEFT’S own humor will eventually be hate speech.