This is what happens when you back the President and his policies. 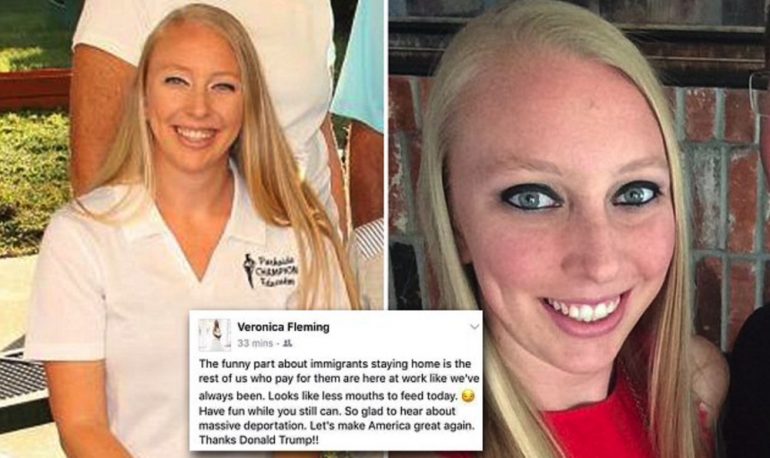 Veronica Fleming, an elementary school teacher from Naples, Florida, wrote a Facebook post during school hours about deporting illegal aliens. When the Principal discovered it, the situation was turned over to the Deputy Superintendant and Human Resources. Fleming was moved out of her classroom and reassigned to ‘administrative duties’.

A petition calling for her to be fired has garnered over 3000 signatures.

Veronica Fleming had her classroom taken away after she made a status that said she was ‘glad about massive deportation’ and there would be ‘less mouths to feed’ on Thursday.

The teacher at Parkside Elementary School, where 96 per cent of students are a minority, thanked President Trump after sharing an article about immigrant protests.

The demographic of the school in Naples, Florida, is a majority of non-white pupils, with 70 per cent Latino and 20 per cent Haitian, causing outrage among parents.

The principal was alerted to the status when parents began calling the school in complaint a few hours after it posted, NBC 2 reported.

The situation was then turned over to the deputy superintendent and human resources, and they made the joint decision to reassign the teacher and have an investigation.
Read more: Daily Mail

Here is a larger image of the post that has cost Fleming her classroom:

It’s offensive to say that deporting people that came into the country illegally is wrong?

I swear I will never understand the Left.

To conflate support to deport illegal aliens to being anti-immigrant is nonsensical.

It isn’t ok to skip the immigration line just because you’re on the southern side of the Rio Grande.

In my opinion, that’s racist.

Treating people differently because of their ethnicity isn’t American.

If you disagree, check out this little truth bomb and then we’ll talk.

Deportation is even a policy that a majority of Hispanics agree with President Trump on.

Apparently, not the Hispanics in Naples.

Maybe they, too, should check out this ClashDaily gem:

In the meantime, let the teacher teach!