For all the trash-talk about people ‘paying their fair share’ where do the numbers REALLY stand?

Raw numbers of how many dollars in taxes were paid don’t paint a very clear picture of the story.

Percentage of the total? Now THAT’s something we can work with.

When you put it in a pie chart for us, it gives even those of us with far less lofty incomes a useful point of reference.

WHAT percentage of your income in taxes?

We’ve all had some version of that question in April, except those who’ve never paid taxes at all.

What happened to Rachel Maddow tonight is like that prom scene in Carrie, except w/ a bucket of boring tax returns. #TrumpTaxReturns #MSNBC

From that information, we were able to deduce the percentage of total income Trump paid in taxes. Looks like Bernie Sanders will be having CROW for dinner tonight. Remember THIS quote:

Not only is Donald Trump going to lose on November 8th, but next year he's going to start paying his fair share of taxes.

This is going to be awkward for you Bernie.

seems to be playing out well pic.twitter.com/ko7p88svmF

Oh look! Even COMCAST paid a lower percentage of taxes than President Trump did.

President Trump — they HATE it when you call him that — paid his fair share of taxes. In the words of one analyst, not even anything improper, let alone illegal.

So, why aren’t Bernie and Barack paying their fair share? Will Bernie sell one of his three houses (surely he doesn’t need THREE, he’s a socialist!) so he can donate a few thousand to the treasury so that our grandchildren don’t have to pay so much to maintain the interest on Obama’s reckless spending?

What HAS he been spending his money on? Hey Bernie? Is that REALLY YOU?

Here’s a handy infographic for you: 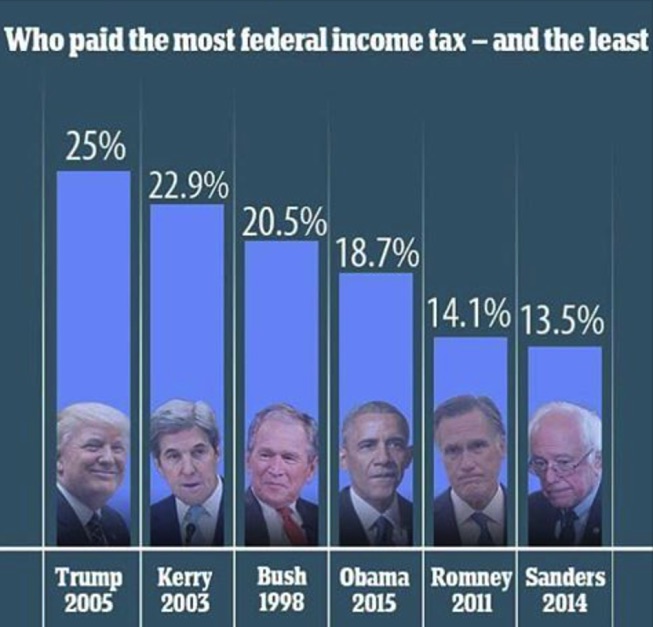 Now we know why you schmucks are called champagne socialists. What are you too good for a Prius?