President Trump posted his annoyance on Twitter. Are you getting sick of the Trump-Russia B.S. that the Media (D) keeps slinging? 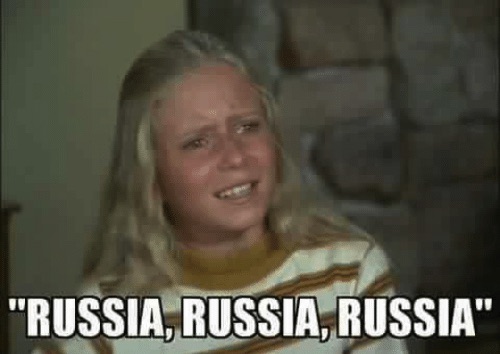 James Clapper and others stated that there is no evidence Potus colluded with Russia. This story is FAKE NEWS and everyone knows it!

The Democrats made up and pushed the Russian story as an excuse for running a terrible campaign. Big advantage in Electoral College & lost!

The real story that Congress, the FBI and all others should be looking into is the leaking of Classified information. Must find leaker now!

The New York Times is reporting that there are a variety of different outcomes that investigators are looking for. Some Democrats are determined to find the ‘smoking gun’ tying members of the Trump Administration to Russia, some are looking for the President’s tax returns, while Republicans are concerned about the leaks of classified information to journalists.

Staff members for the Senate Intelligence Committee have spent weeks poring over raw intelligence that led the Obama administration to conclude that Russia meddled in the election, but they have yet to be given any access to far more politically charged information — evidence of contacts between Russians and associates of President Trump.

The House Intelligence Committee is conducting its own investigation of issues surrounding Mr. Trump and Russia, but the committee’s Republican chairman has said a top priority is to unmask whoever is speaking to journalists about classified information. Democrats on the committee hope the investigation can force a disclosure of the president’s tax returns.
Read more: New York Times

The Senate Intelligence Committee has been given sweeping powers, unseen since the Watergate era, to investigate Russian meddling in the US election. As its scope grows to include suspected ties between the Trump camp and Russia, investigators are starting to worry politics have overhyped the probe…

…Even some Democrats on the Intelligence Committee now quietly admit, after several briefings and preliminary inquiries, they don’t expect to find evidence of active, informed collusion between the Trump campaign and known Russian intelligence operatives, though investigators have only just begun reviewing raw intelligence. Among the Intelligence Committee’s rank and file, there’s a tangible frustration over what one official called “wildly inflated” expectations surrounding the panel’s fledgling investigation.
Read more: BuzzFeed