What? Is it because she’s been shamed for attacking Barron that she has to find a new target?

But it didn’t take long for her to switch it back to public and start attacking President Trump.

Is Rosie trying to attack each member of Trump’s family?

Her latest offensive onslaught was against First Lady Melania.

With all of Rosie’s unhinged tweets and her calls for ‘RESISTANCE!’… does anyone take her seriously?

She tweets out this:

OK EVERYONE – PROFESSOR MADDOW IS ON – PAY ATTENTION #trumprussia

And she thinks that’s rational?

She responded to Melania tweeting this:

“I urge you to not be afraid to fail – as failure will never have the power to define you, as long as you learn from it.” –@FLOTUS 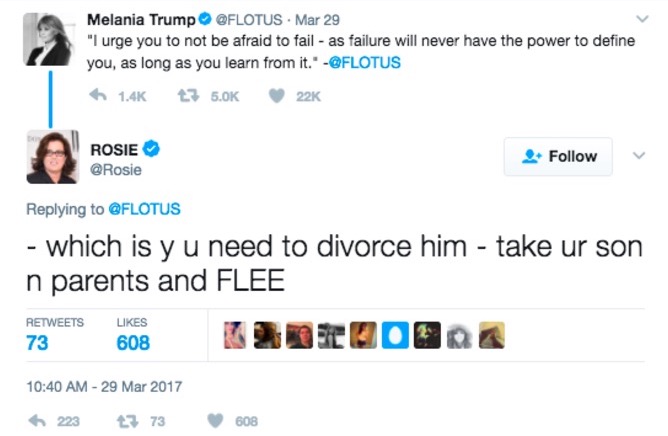 Because who DOESN’T make life-altering decisions based on an all-caps twitter troll tells them to?

And she claims the PRESIDENT is ‘mentally unstable’?

Poor Rosie. Still suffering from those delusions of relevance, is she?