The Liberal Prime Minister loves to smear Trump on immigration, and promote Canada as the kinder, gentler, more welcoming alternative to that ‘horrible’ and ‘judge-y’ America.

You may remember him from those #trudeaueulogies after he praised his dearly-departed friend Castro. (Castro attended his dad’s funeral.)

So, let’s see how well Trudeau puts his money where his mouth is.

In February, amid a dramatic uptick of immigrants into Canada, apparently due to the “Trump Effect,” Trudeau vowed to continue accepting asylum-seekers.

But then reality came along and clubbed him with a stick.

Turns out an explicit open-border policy resulted in an immigration spike! (Especially in a country with such a generous Social Safety Net.) Immigration from Mexico TRIPLED year over year.

But did they get to STAY?

Because Mexican nationals are not exempt from the regular screening process a lot of Mexicans were VERY disappointed.

But the reality in the increasingly leftist country is not as “open” as Trudeau would like the world to think. As Reuters puts it, the numbers show that in Canada, it’s “hard to enter and harder to stay”:

But tough border checks, hard-to-find jobs and fine-tuned enforcement policies mean it can be hard to enter and harder to stay. […] Many Mexicans believe the eTA is all they need to set up in Canada, but in almost all cases they are wrong, immigration lawyers said. The eTA does not even guarantee entry.

Even if they get past the airport, many low-skilled Mexicans hoping to work illegally are likely to be disappointed, lawyers said, noting that it’s difficult for those entering on tourist visas to get work permits without an employer’s sponsorship. —

(eTA is an electronic travel visa)

In fact, the Liberal government — after over-hyping their ‘open borders’ has found itself in the awkward position of turning so many Mexicans. 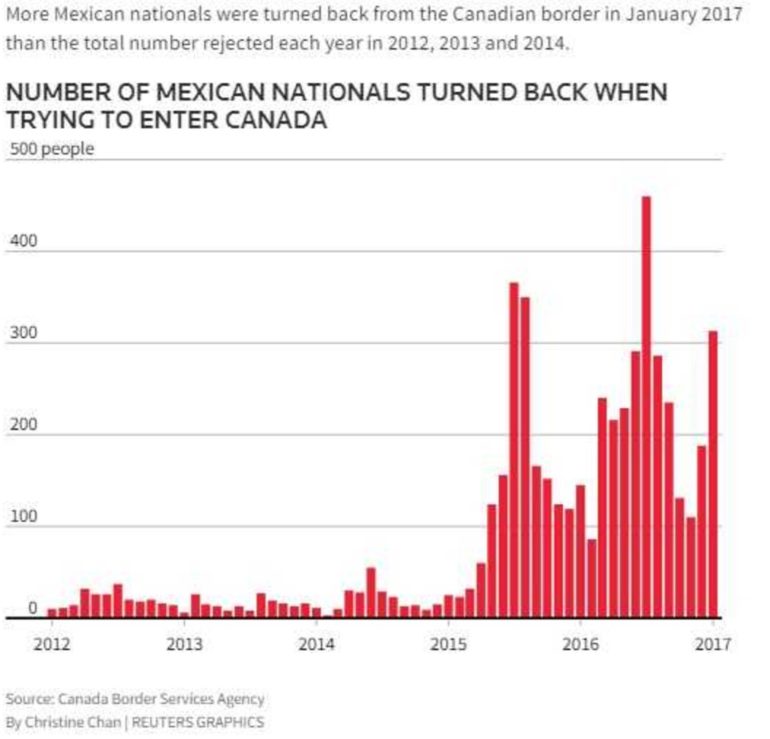 Of turning away even MORE than the ‘hard-hearted’ Conservatives they had criticized before them.

Oh. And the chart makes more sense when you realized that Trudeau replaced the Conservative Harper in October… of 2015.