What’s worse? The spy novelist writing the news, or the humiliated magazine calling them out on it? (Not even kidding about the novelist.)

Here we have two different stories crashing together in a most delightful way.

On one hand, we have an actual author of Russian spy novels consulting for the AP, with a very particular previous career.

Stop. Go back. And read the first part of that sentence again. As many times as you need to. It is NOT satire.

On the OTHER hand, we have no less than ROLLING STONE desperately shouting warnings to the news to stop before it’s too late.

Do you think they’ll listen? Or will we see a spectacular crash.

Smart money is betting on THIS outcome: 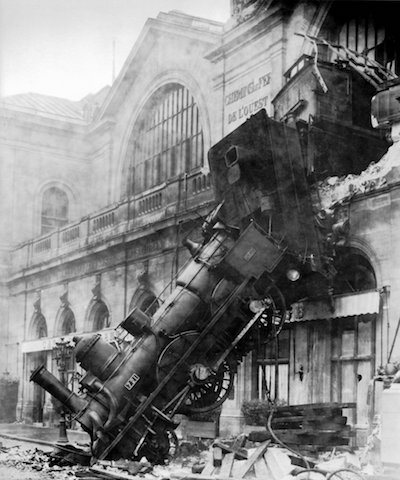 Rolling Stone? You mean the same guys that got smacked down for that infamous ‘fake news’ story about Rape On Campus?

THEY are calling on the media to dial back on the hype. With a warning:

…This is the former Director of National Intelligence telling all of us that as of 12:01 a.m. on January 20th, when he left government, the intelligence agencies had no evidence of collusion between Donald Trump’s campaign and the government of Vladimir Putin’s Russia.
Virtually all of the explosive breaking news stories on the Trump-Russia front dating back months contain some version of this same disclaimer.

…the manner in which these stories are being reported is becoming a story in its own right. Russia has become an obsession, cultural shorthand for a vast range of suspicions about Donald Trump.
The notion that the president is either an agent or a useful idiot of the Russian state is so freely accepted in some quarters that Beck Bennett’s shirtless representation of Putin palling with Alec Baldwin’s Trump is already a no-questions-asked yuks routine for the urban smart set.
And yet, this is an extraordinarily complex tale that derives much of its power from suppositions and assumptions.

…We can’t afford to bolster these accusations of establishment bias and overreach by using the techniques of conspiracy theorists to push this Russia story. Unfortunately, that is happening.

…Those expectations are what allow a paper to turn what may be a page nine story into a front-page sensation.
Setting all of that aside, look at the techniques involved within the more “legitimate” reports. Many are framed in terms of what they might mean, should other information surface.
There are inevitably uses of phrases like “so far,” “to date” and “as yet.” These make visible the outline of a future story that isn’t currently reportable, further heightening expectations.

…These constructions are an end run around the paper’s own reporting standards. The Times by itself could never have run that “explosive” Steele dossier, or mentioned the “embarrassing videos” – because the dossier material can’t be confirmed.
But since it’s all out there in the ether now, thanks to Buzzfeed, it apparently can safely be mentioned. Worse, the Times recounted all this in connection with the other story about alleged contacts with Russian intelligence, adding to the appearance of gravity and salaciousness.

It’s worth reading Matt Taibbi’s whole article, if you get the chance. But that’s enough for you to get the general direction of the argument. It’s not written as a fanboy or Trump apologist.

It’s written as someone who cares about the media’s continued credibility going forward.

It’s basically the same argument WE have been making about the Fake News cycle. Eventually, EVERY politician makes significant errors that need to be publicly corrected. To reword a useful movie line from “The Incredibles” — “if EVERY story is a crisis, NONE of them are.”

How will you get anyone to read what you’re saying if everything you type is ALWAYS IN ALL-CAPS?

You know what we do with commenters who talk in all-caps all the time. We either ignore them or block them.

But there’s another side to this story. Remember the spy novelist reference we mentioned at the beginning? The one who had that very ‘particular’ career?

The AP are using him to consult with. No kidding! It gets better! He used to work for the CIA.

Is the focus of the news suddenly making a LOT more sense to you?

Here’s a little bit about him:

NEW YORK (AP) — Jason Matthews is a retired CIA officer who now writes spy novels, focused on Russia. He was working on a book last year that ordinarily would seem a little far-fetched, but which proved too close to current events.

“The plot line was an American presidential candidate who has a secret that’s so bad it would ensure his or her impeachment, and the only person who would know the secret is Vladimir Putin,” says Matthews, a prize-winning author best known for his “Red Sparrow” thrillers. [emphasis in original]

Newsflash! If you had been following the real, not fake, news recently, the premise has definitely returned to the far-fetched category. Not one intelligence agency has provided proof of collusion between Trump and Russia. In fact the former Director of National Intelligence, James Clapper, flat out denied it on Sunday. — NewsBusters

And ROLLING STONE pleading with them to start showing journalistic integrity before they ruin the reputation of the entire profession?

Alrighty then. That’s not weird at all.

For context? How bad is it that ROLLING STONE is calling them out? It wasn’t that long ago when they were calling for goverment agencies to… well… the headline says it all:

Ironically, that’s the article where we make a case for why a (genuinely) Free Press is vitally important.