President Trump has made it no secret that he’s pretty frustrated with the Media (D). It seems as though he can’t get a break with them.

The Media (D) is talking about President Trump a LOT. He’s dominating more than half of the total news coverage.

If you were to bet how much negative press President Trump had on the ‘Big Three’ Networks during his first 30 days in office, how much would you think it would be?

While most new Presidents get a bit of slack from the Media, President Trump isn’t getting a Honeymoon.

The study by the Media Research Center (MRC) found that the evening newscasts on the “Big Three” TV networks, ABC, CBS, and NBC, were overwhelmingly hostile to Trump.

In its study, the MRC found that over the president’s first 30 days in office, the networks dedicated 16 hours of coverage to President Trump, 54 percent of its total news coverage. MRC found up to 674 negative statements aimed at Trump while only a tiny 88 statements were deemed positive.

“Our measure of media tone excludes soundbites from identified partisans, focusing instead on tallying the evaluative statements made by reporters and the non-partisan talking heads (experts and average citizens) included in their stories,” MRC noted. “In their coverage of Trump’s first month, the networks crowded their stories with quotes from citizens angry about many of his policies, while providing relatively little airtime to Trump supporters.

The MRC also noted that “anchors and reporters often injected their own anti-Trump editorial tone into the coverage.”
Read more: Breitbart 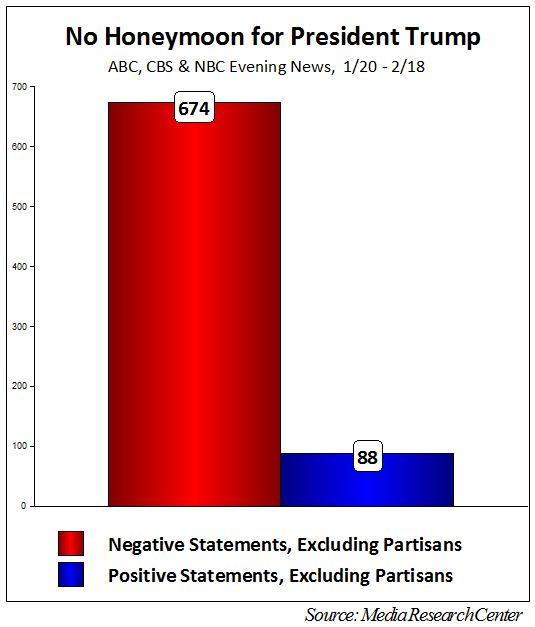 While most new presidents enjoy a media honeymoon, the tone of Trump’s coverage was nearly as hostile (88% negative) as we found during last year’s presidential campaign (91% negative).
Read more: MCR Newsbusters

Well, all that negative coverage during the campaign certainly worked out for the Media (D), didn’t it?

Average Americans are getting fed up with the constant Trump-bashing.

Americans want their President to succeed.

Despite all the bad press.