The ‘Science’ Guy has gone ahead and made an ass of himself. In the name of ‘science’.

(Not political propaganda. No.. not That at all.)

Bill Nye has GOT to stop taking himself (and his B.S. in Mechanical Engineering) so seriously. None of the rest of us do.

Well, MOST of the rest of us don’t.

But he’s famous and played a scientist on (Children’s) tv. And more importantly, has a science-y sounding name.

Therefore he is held up as an authority by the party that tends to rely too heavily on star power and arguments from authority in the first place.

He’s taken a break from calling for the incarceration of ‘climate change deniers’.

And now he’s using his fame to prop up OTHER leftist talking points.

If you thought his bow-tie was tacky, wait till you see his musical guest!

He introduced it as ‘very special’ and a ‘cool little segment’.

(That should have been your first red flag.)

Be warned. It’s a trainwreck. Full-strength, undiluted gender-dysphoric propaganda. On a ‘science’ show.

It’s vulgar but doesn’t curse. Click play at your own discretion.

Here is a portion of the ‘lyrics’ to a song so infamously bad that when it had over 100000 views had 11,000 thumbs-down ratings (both of those stats are still climbing):

This one goes out to all my bipeds who identify as ladies!
This world of ours, is full of choice

But must I choose between only John or Joyce?

Are my options only hard or moist?

My vagina has its own voice. Not vocal chords, a metaphorical voice.

Sometimes I do a voice for my vagina, please don’t tell me I’m the only one who does that.

‘Cause my sex junk is so oh oh oh much more than either or or or!

Power bottom, or a top off. Versatile love may have some butt stuff!

‘Cause my sex junk is so oh oh oh! Much more than either or or or!

I’m down for anything, don’t box in my box!

Give someone new a handy, then give yourself props —
see the rest Here

It continues on but does not get any better.

Slap it on #Netflix and you’ve hooked the Millennials.

Now that gender is a ‘spectrum’ will he be rethinking his position on women? Or will he just identify as one to tilt the numbers. Seems pretty ‘binary’ there Bill. 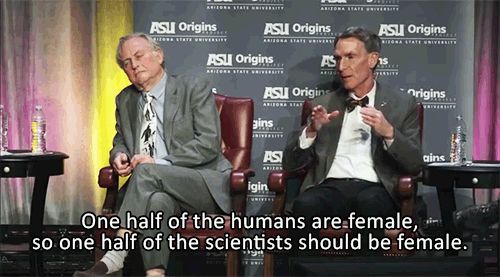 And of course, this ‘song’ will be celebrated by the Left for being ‘brave’.