CNN’s Russia narrative will sink faster than the Titanic.

This should be fun. CNN, MSNBC and all the others have been tying themselves into KNOTS trying to paint Trump as beholden to Russia, as his puppet.

They, along with other Leftist media sources have been pimping this story from the beginning.

Buzzfeed and CNN published the bogus story about hookers. 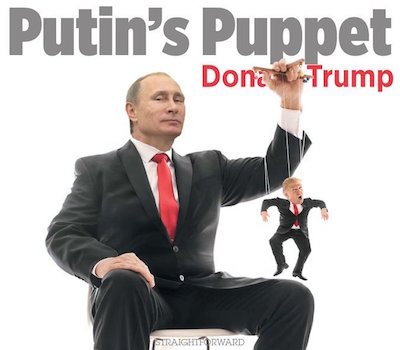 Even though NO Evidence has EVER been shown to indicate wrongdoing between Trump and Russia.

The REASON it was such a big story was — had it been true — the danger of having a President put the interests of Putin (or someone else) ahead of national interests. And that WOULD be bad. Truly.

Yes. Exactly like that. Who knows. Something like that could lead to something ridiculous. Something that would strengthen the hand of a rival nation.

The concern might be that a corrupted president were say nothing when a rival nation forcibly seized territory from a neighbor.

Well, it didn’t take long for a chance for these claims about Trump’s divided loyalties to be tested.

The use of Sarin gas in Syria brought American interests and Russian ones into a collision course. Did Trump blink, like Obama did?

Nope. Quite the opposite. His ‘good buddy’ Putin is pissed.

#BREAKING US strikes in Syria 'aggression against sovereign state': Kremlin

Furthermore, RT reported after the missile attack that Viktor Ozerov, chair of the Russian Senate security and defense committee, called the American bombing “an act of aggression against a UN member.” The site reported that Ozerov “added that Moscow would call an emergency UN Security Council meeting to discuss the situation,” and added that Iran had also “strongly condemned” the attack, which Russian media claim killed five people. —Heavy

This might be a good time to point out something Russia might not want us to talk about. As Tillerson said:

Secretary of State Rex Tillerson said the United States was forced to act against Syria because “clearly Russia has failed in its responsibility” to secure and destroy Syria’s chemical weapon stockpile under a 2013 agreement brokered with President Obama.

Tillerson said the strikes were also an attempt to push back against Bashar Assad and demonstrate that the world community will not ignore the use of chemical weapons.

“He in effect is normalizing the use of chemical weapons, which then might be adopted by others,” Tillerson added during a late-night briefing with reporters in Palm Beach. —LA Times

ONE of our presidents looks like he was Putin’s Bitch.

But will CNN seriously try to make the case that it’s Trump?

Gee, why do you think CNN’s ‘trust’ polls are tanking?