But, weren’t they desperately coming here for ‘a better life’? What changed?

Human nature. It’s a delicate balance. Diminish the ‘reward’, and you change what they’re willing to risk to get it. Case in point: Immigration.

The number of illegal immigrants attempting to enter the US by crossing the Rio Grande has fallen dramatically since President Trump took office.

In March this year, only 4,143 people were detained by Border Patrol Agents at the notorious river crossing as opposed to 15,579 who were caught in January before Trump was in full swing in the White House.

The sharp decline has been chalked down to the president’s tough line on immigration.

Border Patrol agents said migrants were no longer willing to risk the dangerous journey and pay steep smuggler fees now that the chances of them being allowed to stay in the US are so slim.

The phenomenon at the Rio Grande crossing is not isolated. Only 12,193 people were arrested across the entire Southwest border in March, 50,000 fewer than in October.

Check out this graph, it’s shocking! 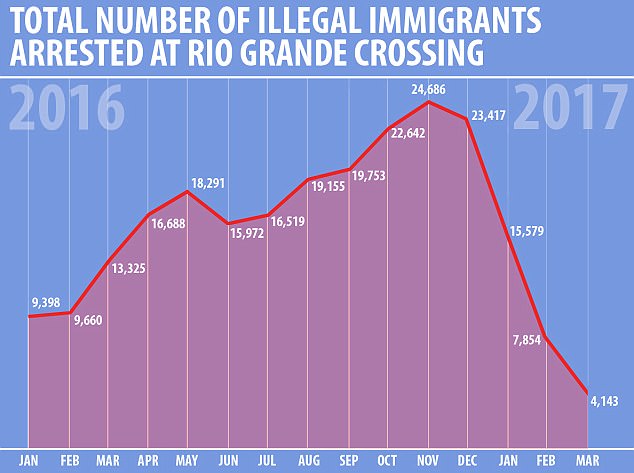 The guys who smuggle you into the US don’t offer refunds if you get sent back home.

Why shell out that kind of money if you don’t get the benefit on the other side of the border? You might as well do it the legal way!

(And wasn’t that kind of the point? And if you’re paying attention, by extension, that means an income stream of the crime syndicates is drying up. Which means a little less power and infuence to drive the violence and corruption that terrorizes too many ordinary citizens among our neighbors on the Southern Border.

Trump said he’d be on the side of Law and Order.

And do we really need to spell out what that would mean for the Open-borders Democrats like Obama, Hillary and the Sanctuary City mayors?

Who DO these people on the Left despise decent, law-abiding Mexican citizens so badly that they’ll assist organized crime? (And that’s Besides Fast and Furious)

Share if EVERYONE benefits from a secure Mexican – US border.