Aren’t those who WRITE our laws supposed to ABIDE by them? What about RIOTING?

Because it turns out the supposed ‘anti-fascist’ group that has been raising hell in Berkeley… has ties to Berkley’s MAYOR.

Berkeley Mayor Jesse Arreguin was revealed to be a member of the anti-fascist group, By Any Means Necessary (BAMN), on Facebook. BAMN orchestrated the violence that shut down a scheduled lecture at UC Berkeley featuring Milo Yiannopoulos in early 2017. Arreguin is allegedly also friends with BAMN leader, Yvette Felarca, on Facebook.

‘By Any Means Necessary’.

By any means? Yes, by ANY means. Here’s a comment thread where they are discussing tactics (apologies in advance for any ‘spicy’ language they used): 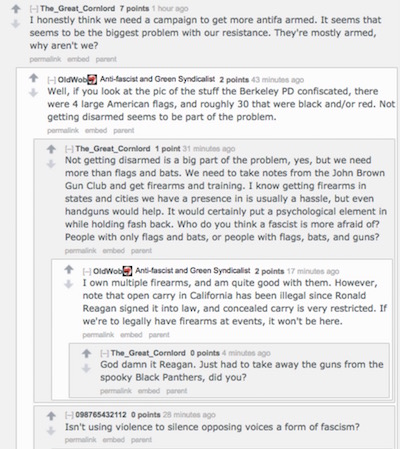 They are celebrating the violence you see on this video.

At 3:08 she is claiming ‘self defence’ in attacking non-violent pro-Trump demonstrators with various weapons.

Often described as a “militant left-wing” activist group, BAMN frequently engages in violent forms of protests. A Berkeley newspaper noted in 2001 that the group was a front for an “an obscure Detroit-based Trotskyist political party called the Revolutionary Workers League.”

This is a Trotsky-based group? As in SOVIET? That explains a lot.

They are trying to use violence to prepare the ground for a violent uprising that will give America a taste of all the good things the 1917 Russian uprising led to in Russia.

(HERE’S that Russian Angle everyone’s been looking for. Finally! Somebody tell Don Lemon and Rachel Maddow!)

Yes, that uprising that led to bread lines, and a Cold War, and Pogroms in the Ukraine, and people disappearing in the night. And children snitching on parents for party disloyalty.

Because why watch VENEZUELA circle the toilet as a nation when collapsing under Socialism when we can enjoy that ride right here in America!

Berkeley Mayor is a Member of Facebook Group for Militant Leftist Organization That Orchestrates Riots https://t.co/Ru2wbmkpSX

God Help us. Do these people even know what they’re fighting to create here in America?

Come ON people! Read a book!