You’d think he’d have seen it coming. He was psychic after all…

This Darwin Award recipient and self-proclaimed ‘psychic’, was performing a dance in Thailand that normally ‘Wows’ the crowd with a ‘superhuman’ feat in which he appears to be impervious to a sword thrust.

Unfortunately, the sword — that normally breaks when pressed against his chest — failed to snap and plunged into the 25-year old’s ribcage instead. 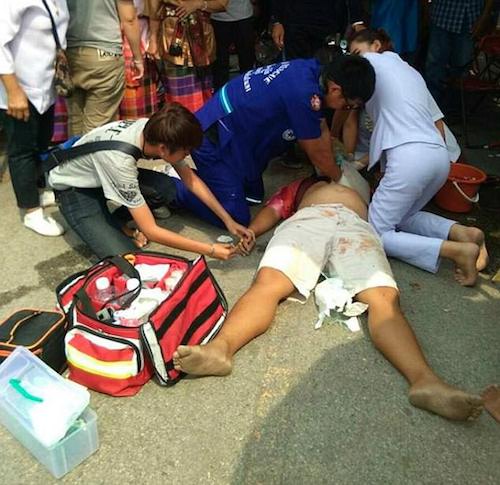 Paramedics tried to resuscitate the man.

He was later pronounced dead at the hospital.

A man claiming to be a psychic died when he accidentally stabbed himself in the heart with a sword in a bungled act to prove his immortality.

Theprit Palee, 25, had been performing the traditional dance in front of spectators in Chiang Mai, northern Thailand, yesterday afternoon.

The folk ritual is said to honour the spirits of ancestors and in previous shows he would impress onlookers by appearing superhuman when the blade broke as it was pressed against his chest.

…Resident Noom Udorn said Theprit had provided readings for several years to local people.
He said: ‘This is a tradition that happens every year. The sword normally breaks but this time it went inside him.

‘The medium has been respected for many years. People love him. He is one of people’s favourites.’
Read more: Daily Mail

Watch part of the dance:
https://www.youtube.com/watch?v=V99jX_2y7sc

Yes, it is tragic that this man died.

But he kinda… pushed a sword into his own heart.