This was Not exactly the demonstration of ‘Alpha-Male Prowess’ Kim Jong-un was hoping for.

It was the North Korean annual event. ‘Day of the Sun’.

It marks the birthday of the crazy regime’s founder. It’s also a day were North Korea puts on a display of its military readiness and prowess.

With the US having just used the MOAB to blow an ISIS cave complex to smithereens, and with North Korea’s heated rhetoric, Kim Jong-Un needed to step up.

So he launched a missile.

At least, he tried to.

Don’t worry, Kim. It’s nothing to be ashamed of — probably. We hear this kind of thing happens to LOTS of tinpot tyrants of about your age.

Some things just don’t work quite as well as you’d hoped hey would.

He launched a missile. It didn’t work properly. It blew up. Seriously.

North Korea launched a missile near Sinpo, on its east coast, and the missile blew up almost immediately, a U.S. military spokesman said on Saturday.

“The missile blew up almost immediately,” Benham said. “The type of missile is still being assessed.” — Yahoo

That, of course, is why the internet has messages like this one: 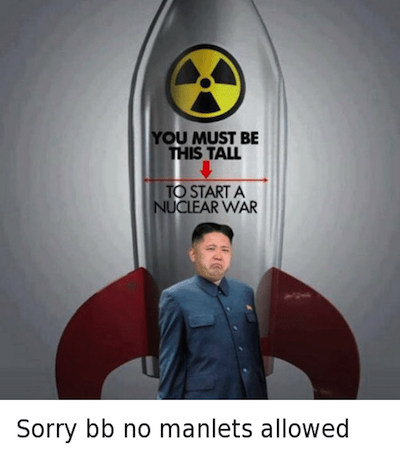