The same people who voted for Hillary are upset about Trump’s ‘lack of transparency’.

That’s one great BIG pile of irony, right there.

Apparently, now that the Russia story ran out of gas, they’ve wasted no time moving on to the next regularly-scheduled outrage-fest. This one is about Trump’s taxes.

They claim to be concerned about conflicts of interest. (Like the ones that even lefties like the Young Turks have raised about Clintonian pay-for-play schemes.)

Here’s the problem. On NOVEMBER 8th, people knew everything about his taxes that they know now. Let’s not forget the fact that Hillary failing to get elected may have had something to do with her ‘transparency’.

(Rachel Maddow notwithstanding.) And they voted for Trump ANYWAY.

In fact, the New York Times knowingly broke the law to make sure you knew even MORE about his taxes then you had known.

These are the same people who told us to ‘move on’ from Hillary’s email story. Even though Hillary is almost certainly committing any number of felonies in how she handled secret information and her secret home-brew server. On top of that, she’s lied every step of the way.

If there were something — ANYTHING — incriminating on Trump? Don’t you think a government that has let itself be politically weaponized, and is actively breaking the law to release politically damaging unmasked leaks, would have made it public by now? 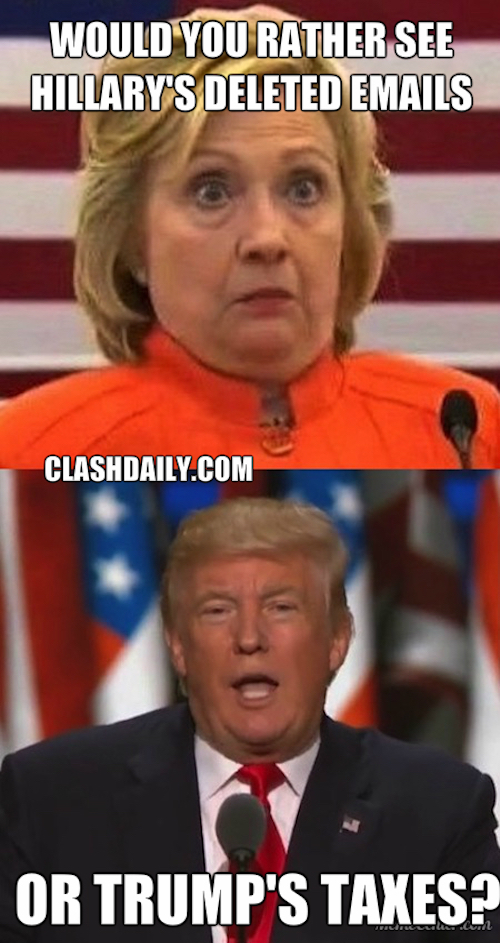 Do you REALLY think anyone with an (R) after their name, or even not named Clinton would have been able to survive the kind of scandals Hillary keeps drowning herself in?

Especially since she’s been called out as lying to Congress about it.

Which are YOU more interested in? Trump’s taxes, or Clinton’s emails?

Feel free to list OTHER things in the comments that you would think more important than the immediate release of Trump’s taxes. Here’s a few to get you started.

What was Obama really doing when Benghazi went South?

What political favors does Soros get from all the money he shovels at ‘progressive’ movements?

What was REALLY discussed during the ‘tarmac’ conversation?