Did YOU see this one coming?

The Democrats have their panties in a bunch because President Trump just fired FBI Director James Comey.

Now the Dems are really between a rock and a hard place.

The spin is about to hit the fan, so brace yourselves.

The Leftists were hoping that it would’ve been Cacklin’ Cankles herself — Hillary doing the firing of Jim Comey.

The firing puts Democrats in a difficult position. Many had hoped that Mrs. Clinton would fire Mr. Comey soon after taking office, and blamed him as costing her the election. But under Mr. Trump, the outspoken and independent-minded Mr. Comey was seen as an important check on the new administration.
Read more: The New York Times

The Spin Doctors are doing their stuff.

And they’re going to clock in some overtime on this one.

It’s now all because of RUSSIA.

Of course, it is. 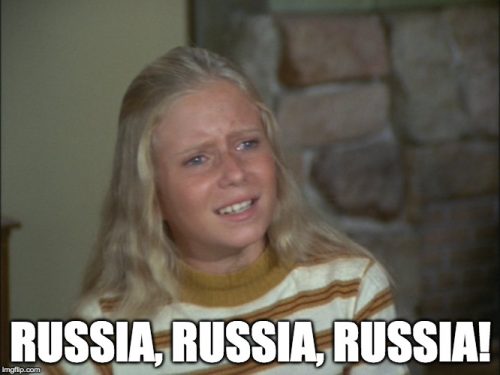 The Democrats are incredibly concerned — and shouting it from the rooftops — that the President has fired the man that is investigating possible ties between the Trump Administration and Russia.

Except that in the letter of termination President Trump said that Director Comey had informed him on three occasions that the President wasn’t under investigation.

So, why is President Trump kicking Comey to the curb?

It’s because of the way he handled Crooked Hillary’s email investigation in the first place.

At the heart of it, Comey is a cop, not a lawyer.

However, he handled the July press conference about Hillary’s emails in a way that was inappropriate for a cop.

He should’ve come clean then that the Justice Department wouldn’t have charged Hillary if they caught her hovering over Mr. Body in the Library with the bloodied candlestick in her hand.

He shouldn’t have said what the lawyers should and shouldn’t do.

In a letter to Comey, Trump said the firing was necessary to restore “public trust and confidence” in the FBI. Comey has come under intense scrutiny in recent months for his role in an investigation into Democrat Hillary Clinton’s email practices, including a pair of letters he sent to Congress on the matter in the closing days of last year’s election.

Trump made no mention of Comey’s role in the Clinton investigation, which she has blamed in part for the election result that put him in the White House. But in announcing the firing, the White House circulated a scathing memo, written by deputy Attorney General Rod Rosenstein, criticizing Comey’s handling of the Clinton probe, including the director’s decision to hold a news conference announcing its findings and releasing “derogatory information” about Clinton.
Read more: Associated Press

CLASH POLL: Are You HAPPY Comey Got Canned?

Is it wrong to wish that it had happened this way instead?