We all know that terrorists will listen to Katy… after all, they’re big fans, right? 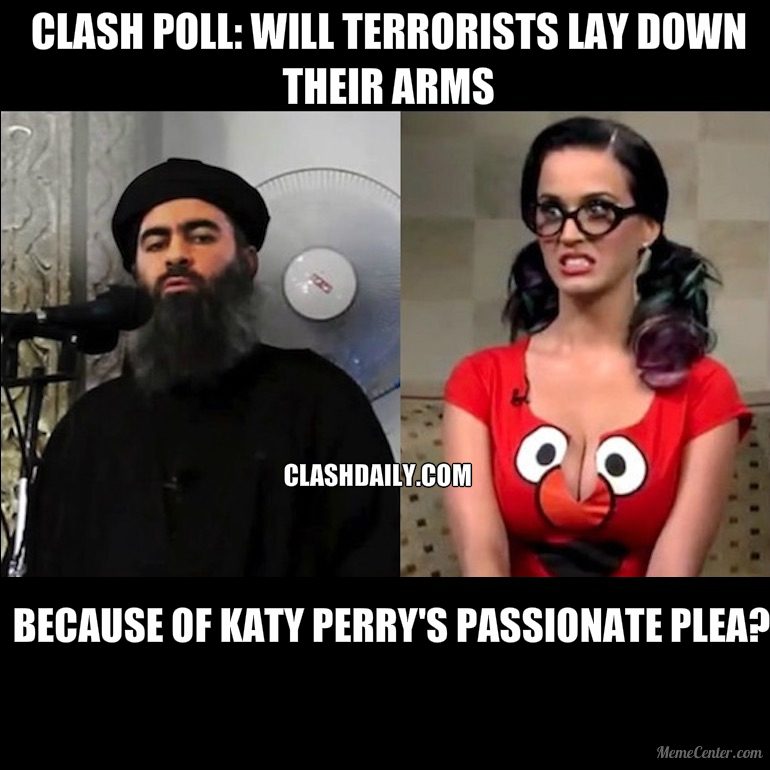 CLASH POLL: Will Terrorists Lay Down Their Arms Because Of Katy Perry's Passionate Plea?

In an interview, Katy has said in the wake of the Manchester terror attack after fellow pop-artist Ariana Grande’s concert, that we need to ‘unite’ and ‘coexist’ with no barriers or borders.

“Whatever we say behind people’s backs, the Internet can be a little bit ruthless as far as fan bases go but I think that the greatest thing we can do is just unite and love on each other,” Perry said, adding, “No barriers, no borders, we all just need to co-exist.”
Read more: Breitbart

Of course, this will certainly resonate with Islamic terrorists hell-bent on killing us. They’re just going to lay down their arms and stop the jihad, right?

How could they not be fans of Katy Perry?

Her stance on sexual ‘experimentation’:

And the way she dresses.

Not like those frumpy women in their home countries, amirite?

I’m sure that Mohammed planning the next attack on the infidels is waiting with baited breath to hear what Katy Perry has to say about it.

Can you imagine this scenario:

‘Achmed, did you hear what the Perry woman just said? It has warmed my heart! We’ve been handling this all wrong. Contact the rest of the terror cell tell them that we will stop these acts of violence. We will embrace liberal democratic ideals and live in a peaceful, loving world where we are all united. It will be beautiful, just like the Perry woman’s voice. Sigh.’

‘Yes, Mohammed! She is so right. We all just need to get along and live in love and unity! Hand me that coexist bumper sticker, I’m going to put it on the truck we were intending to use for an attack.
And all of a sudden I feel like I should be handing out Pepsi to the infidels!’

‘So do I. How strange. It must be our newfound love of all things American!’

This jihadist ideology is corrupt, morally bankrupt and destructive.

Wishing it away won’t work.

And refusing to confront it won’t work.

Calling people who are trying to confront it names won’t work.

Something has to change, and I think President Trump calling these terrorists the ‘evil losers’ that they are and his appeal in Saudi Arabia to Muslim leaders to ‘drive out’ extremists is a fantastic start.