Remember Obama’s ‘Cool Clock Ahmed’ tweet, and the White House invitation? You haven’t heard the last of him!

It’s been awhile since the last time we checked in on him. ‘Clock boy’ was the kid who disassembled an alarm clock, put it in a metal case, and made international headlines for being arrested in a bomb scare.

To the Left, he was an instant darling — an innocent victim of racial profiling, and got fawning attention from Obama and some high-profile tech companies, including invites to the White House and MIT (he turned down the scholarship to MIT, and went to a school in Qatar, instead). 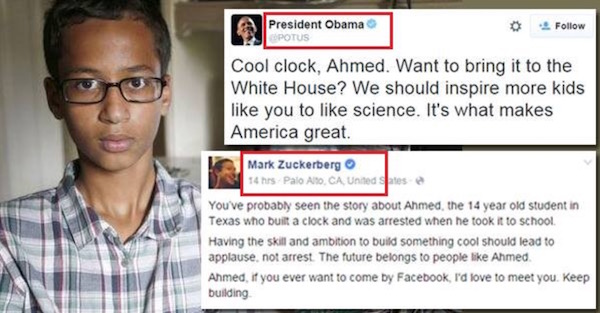 He suffered so terribly through his ‘ordeal’… 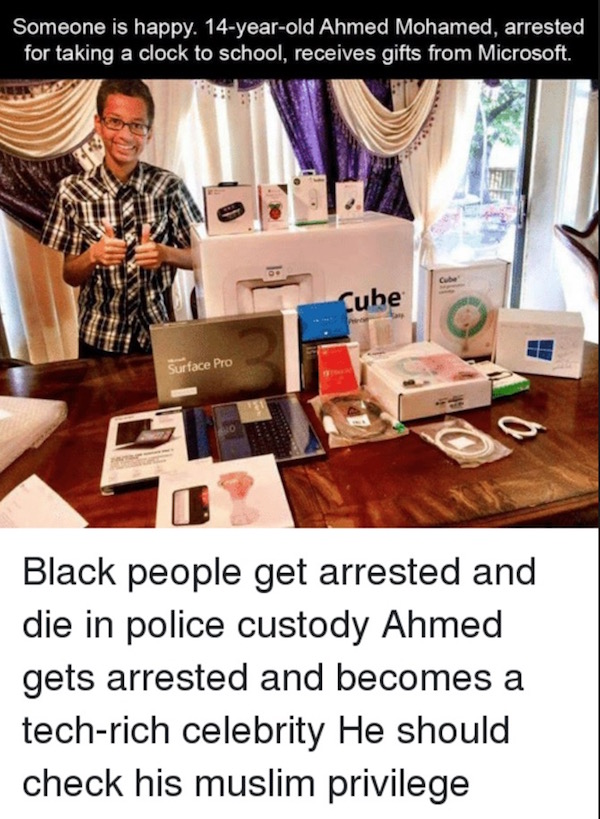 (Which was exposed as a publicity stunt.

It should come as no surprise that his dad is an America-hating ‘Islam will rule the world’ type.

So for all the ‘indignities’ he has suffered — free tech swag, a visit to Obama’s White House and all the rest, the most natural thing for this sweet kid to do was to soak the Americans for money.

He sued the school that called the cops.

Here’s what happened with the suit:

Mohamed filed a Federal lawsuit against the City of Irving, Texas and Irving Independent School District accusing them of violating his son’s civil rights.

…The judge wrote: ‘Plaintiff does not allege any facts from which this court can reasonably infer that any IISD employee intentionally discriminated against Ahmed Mohamed based on his race or religion.’

Further, he notes that the suit failed to identify any policy, custom, or practice of the City that was allegedly the moving force behind any violation of Ahmed’s Fifth Amendment rights.
When the lawsuit was first filed in 2016, the district hit back at the Mohamed family’s allegations saying Ahmed deliberately disobeyed his teacher by activating the clock despite her warning.
The judge said the failed to allege any facts from which the court could reasonably conclude that Ahmed was discriminated against based on his race or religion. —DailyMail

district hit back at the Mohamed family’s allegations saying Ahmed deliberately disobeyed his teacher by activating the clock despite her warning.

So, Ahmed tried to get $15 Million over his stunt. Which party here was the unreasonable one?