What’s the opposite of diversity? UNIVERSITY! You’re now only allowed one opinion on campus…

This is why you pay the big bucks for tuition, folks.

To make sure that the college students come out with the ‘correct’ worldview.

A ‘Students for Life’ group that had permission to put Pro-Life chalk writing on the sidewalks of the campus had them removed by a professor and his students.

The incident was captured on video by one of the members of Students for Life.

Of course, he does.

Thatcher gives the ridiculous argument that his — and his students’ — Free Speech is to censor the Students for Life Free Speech by removing the offending statements rather than counter with their own speech like rational human beings.

It’s the statement that ‘College campuses are not Free Speech Areas’ that is so very shocking, though.

If Free Speech isn’t permitted on a college campus, then campuses are no longer institutes of higher learning, but nothing more than indoctrination centers.

The Students for Life group has filed a lawsuit against Dr. Thatcher for his egregious behavior.

The lawsuit, filed Thursday, also asks the court to prohibit Thatcher and “any other persons acting on his behalf or at his direction from interfering, disrupting, or altering any future lawful expressive activities that [Fresno State Students for Life and its members] conduct.”
Read more: Campus Reform

In a move that makes Dr. Thatcher look like freaking Nostradamus, DePaul University has prohibited the campus group, Turning Point USA to display their poster promoting an event titled, “Dictatorships and Radical Islam: The Enemies of Gay Rights” with a gay reporter speaking on radical Islam’s discrimination of the LGBTQ community.

At the center of the issue is that the poster had the words ‘Gay Lives Matter’ in bold letters.

This, apparently, is not permitted.

Here is the ‘offensive’ poster: 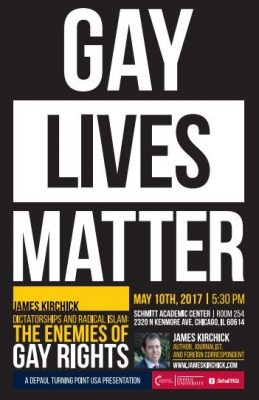 The speaker, journalist and foreign correspondent, James Kirchick, is widely viewed as a leading advocate both in the US for gay politics and internationally for gay rights.

But the event is being protested by a campus student group, DePaul Students for Justice in Palestine.

Even Kirchick finds this a bit fishy:

Here’s the call for protests of my talk tonight at @DePaulU “Dictatorships and Radical Islam: Enemies of LGBTQ Rights.” Notice missing word? pic.twitter.com/zgesx9zSuJ

As for the “Gay Lives Matter” posters, Amy Mynaugh, director of the Office of Student Involvement at the Catholic university, denied them on the grounds that “using the same look/brand as BLM [Black Lives Matter] pits two marginalized groups against each other,” according to an email she sent to Turning Point USA that was obtained by The College Fix.

“It doesn’t appear that Turning Point has any connection to the Black Lives Matter movement and this seems to simply be co-opting another movement’s approach,” she added.

And you can’t have that!

Two marginalized groups being pit against each other?

That would be like watching a wrestling match between Feminists (one gender deserves special treatment) and the Transgender movement (Gender is a social construct).

(My money is on the Trans group — they’ve got men with higher muscle mass on their side.)

Really, colleges need to make sure that the entire Left is united — the way it should be — against President Trump.

The President of the Turning Point USA chapter of DePaul disagrees with Mynaugh:

DePaul TPUSA president Jason Plotzke said via email that the poster effectively advertises the event and highlights its purpose.

“Frankly it makes no sense to have it not approved,” Plotzke said. “The statement is very simple and you could not market such an event any better and eye catching. When people see that statement, they will either agree or disagree, but the point is getting people to see the message, and we firmly believe that it would have been effective.”

Plotzke also disagrees with Mynaugh’s reasoning for denying the poster.

“We do not see how the branding of Black Lives Matter is exclusive from all other lives and we cannot make a similar statement in a different movement,” he said. “Sure, it is related and based off the BLM slogan, but with no intent to undermine the movement. We are not even using the poster to push an entire movement, but rather a specific event. We, as students in an academic setting, should be allowed to market our events as we see fit.”
Read more: The College Fix

Oddly, they left out the word ‘Radical’ before ‘Islam’.

So, just so you’re keeping up, here’s the scorecard:

Islam for some strange reason has garnered so much support from Liberals that they’re throwing their base under the bus for them.

If it weren’t so sad, it’d be hilarious.

If you’re concerned about colleges and free speech, you need this book.

And get the other one for your millennial that needs to ‘de-stress’ with a bit of coloring.