What shall we do about Mosques? Do they need to be left alone or carefully scrutinized?

It’s a big question. One where the questions of security and liberty intersect. 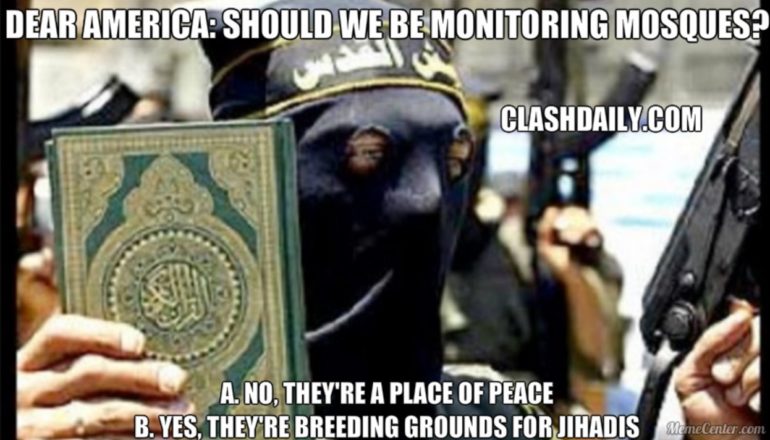 What are we doing about the delicate question about Mosques and Radicalization?

It would be an easy question to answer if we could believe everything CAIR and the Left tells us about how intrinsically harmless the Muslims are.

But facts are tricky things, aren’t they?

We have evidence of mosques elsewhere being used as staging areas for attacks.
HEY, POLLYANNA: Check Out The WEAPONS Cache Just Confiscated At MOSQUE

In another mosque, they discovered some Suicide bombs.

Remember the PULSE nightclub shooting? The shooter was praying at a mosque four days earlier. Is it relevant? If he really was motivated by his religion, then it might be.

What about the celebration of the death of an assassin? He murdered a Christian accused of blasphemy. And he is hailed as a martyr. At a Mosque right here in America, there was a memorial service for the killer. Does that concern you?

Before you, gentle reader, play the Islamophobia card, what would you say about Tarek Fatah’s concerns? He’s a Muslim, by the way.

Even a moderate Muslim, Tarek Fatah has been busy blowing whistles on some of the more extreme mosques right here in North America, and around the world. Not surprisingly, he has Fatwas on his head.

Examples of his work:

He has outed Imams for such things as explaining how to decapitate an infidel… including that the decapitation should be intentionally slow. “you should enjoy yourselves“.

And this undercover video is something you will never hear CAIR talk about, with a little preface:

On my Indian ZeeNews TV show, ‘Fatah Ka Fatwa’, Indian Mullahs and even supposedly liberal Muslim feminists dodge the truth and deny that the derogatory word ‘Kaafir’ is the pejorative word to demean non-Muslims, i.e. Christians, Hindus, Jews, and Atheists.

Until now it has been difficult to counter the straight-faced lying by Islamic radicals or their Muslim nationalist allies who try to cover all our blemishes simply as an act of Muslim patriotism. That is until now.

Now comes ‘Undercover Mosque’ a UK TV documentary about British Mosques where sermons are in English and thus cannot be swept under the carpet by insisting the translation of Arabic or archaic Urdu is not correct.

Watch and weep if like me, you too are a Muslim. Our faith is in the hands of the most hateful of human beings.

At what point do these different points of data provide a sufficient picture to indicate that Mosques may be different from most other religious houses of worship?

At what point do we begin to scrutinize them to determine which of them may be likely targets of (or worse, willing accomplices to) radicalization?

DEAR PATRIOTS: Should We Be MONITORING U.S. Mosques?