What do you think? Is American Law not enough?

Sharia Law, the set of rules that governs Muslims, has been implemented in other places. 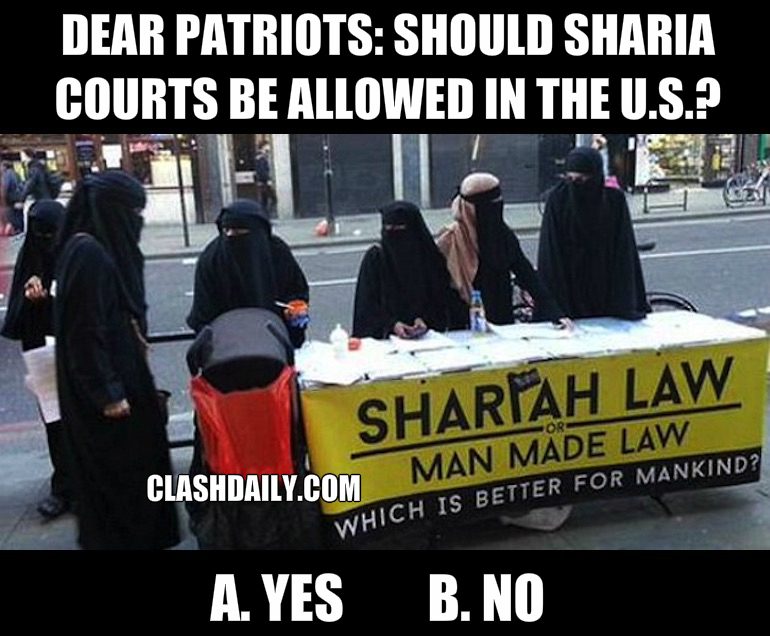 DEAR PATRIOTS: Should SHARIA Courts Be Allowed In The U.S.?

Just one reason that Sharia shouldn’t be implemented is that it is absolutely regressive and audaciously violates women’s rights.

That’s why it’s so bizarre to see all those women in the full beekeeper burka appealing for it.

Under Sharia, those women are appealing for these awesome things:

1. Beating and raping wives is legal under Sharia

2. Women are given fewer rights than men

3. Marriage and sex with pre-pubescent girls is legal (so much for our pedophilia laws)

4. Women don’t have the same divorce rights as men

5. Female rulers are frowned upon (someone should tell Linda Sarsour)

6. Wives are to be subservient to their husbands

7. Women are seen as ‘lacking intelligence and religion’ (I wonder if Mohammed’s wife that encouraged him to continue his cave chats with an ‘angel’ knew that this would be the result)

Where are all the vagina-costumed, pay-gap shrieking, I’m-With-Her feminists decrying Sharia?

Nowhere to be found, because that would be intolerant.