Colbert just upset a whole lot of people by making a terrible joke about President Trump.

You know it’s bad when both Republicans and the Left-leaning LGBT crowd are calling for your head.

The joke is being called ‘homophobic’ and the #FireColbert hashtag is trending.

Unlike what happened with Bill O’Reilly, no advertisers have ditched the show or protested CBS.

Critics are branding Stephen Colbert a homophobe over a joke he made about President Trump on Monday night’s Late Show.

The episode, filmed at the end of President Trump’s first 100 days in office, ended in a long-winded attack against the commander-in-chief – who he called a ‘pricktator’ who attracts ‘more skinheads than free Rogaine’.

What critics took issue with was Colbert’s comments about President Trump and Russian President Vladimir Putin.

‘You talk like a sign language gorilla who got hit in the head. In fact, the only thing your mouth is good for is being Vladimir Putin’s c**k holster,’ Colbert said.

At the mention of the term ‘c**k holster’, the entire audience – which had been laughing through the more than 12-minute monologue – erupted into gasps.

The reaction was so loud that Colbert had to wait for them to settle back down to finish the rest of his speech. 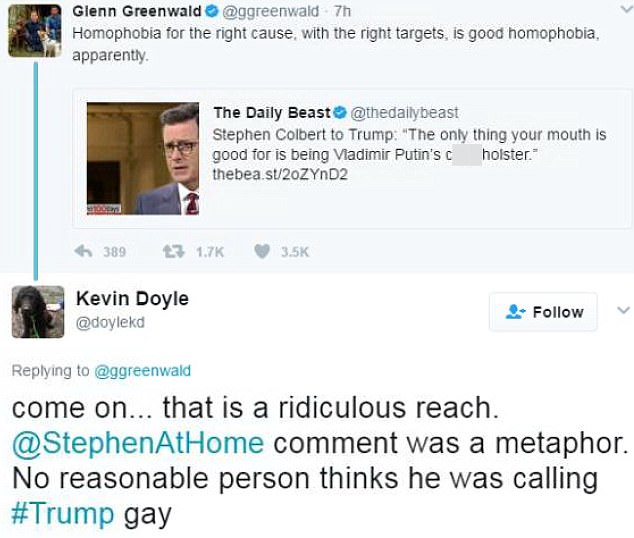 Do you think that anything will happen to Colbert?

Or will the outrage be strictly online?