This kind of behavior used to be called ‘savagery’. Not ‘entertainment’.

Where did America go so very wrong? And how is that while Social Media will flag a Conservative opinion piece and ‘ban’ it, actual CRIMINAL ASSAULTS like this somehow manage to slip through?

Four people have been arrested, and more arrests are possible, over a woman’s brutal beating that was caught on video in Millville, New Jersey.

The fight happened on Wednesday in the 100 block of South 3rd Street.

The video shows the victim surrounded and repeatedly hit again and again.

…That, down here that day, was just unacceptable,” resident Zahhir Walker said.

Residents say this is part of a bigger problem; they say this type of violence is done for entertainment on a regular basis.

“You had people from other cities coming to watch this as entertainment. That’s sad. Why? There’s nothing out here for these kids,” said Walker.

“That’s what people wanted to see, a fight. Well, they got what they wanted, a fight. People need to grow up,” said resident Tiffany Bowman.

They also say fights like these are just the tip of the iceberg and the violence in Millville is out of control. — ABC

This isn’t an issue of money. It’s an issue of respect. The people doing this have no respect for the intrinsic value of human life. If they did, they would be DEFENDING the victim, not cheering and filming the attack.

Is this an isolated incident, or no? Just how bad is it getting in Millville? Here are some stats:

From the ‘Area Vibes‘ website, a breakdown of local crime numbers there, compared to the National Average. There’s a table in the site, but a graphic makes those numbers jump out at you. 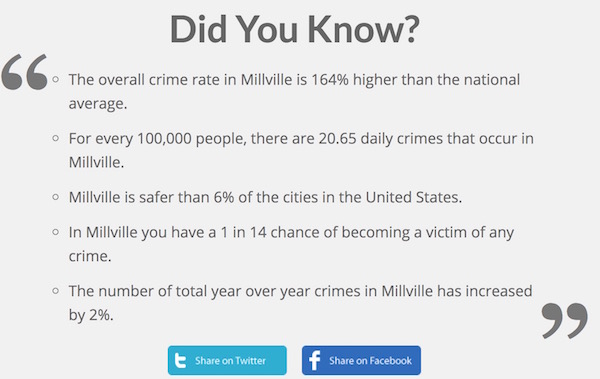 Sure. Until you realize that (according to a 2016 site) Millville is only the THIRD most violent place in New Jersey.

Just how bad are the OTHER two cities?