Ah, those Liberal Trolls! They are unwittingly funny sometimes…

They are an endless source of amusement.

These folks are just clueless — and, oddly, seem to be proud of it.

They’re the know-it-alls and have all the facts, right?

Yep. Those liberals know everything.

Not only that, they can predict the future, too!

Liberal Trolls know that the ‘climate change’ will destroy the earth unless we give billions of dollars to Leftist organizations to ‘fight’ it by buying credits that ‘offset’ carbon emmissions. What does that mean? ‘Big Green’ is just redistributing wealth from the ‘makers’ of the world and handing it to ‘green’ businesses that are using environmentalism as a cash-grab.

Yep. That’s why Leonardo DiCaprio and Barack Obama fly all over the world on private jets to lecture the rest of the world on cutting back on their carbon emissions.

(Even though none of them believed that 5 years ago.)

They know that Trump was colluding with Russia to ‘rig’ the election and that he is a racist, sexist, misogynist, xenophobe.

That’s why they keep calling for his assassination at every turn.

They know that all conservatives are knuckle-dragging, mouth-breathing bigots that don’t have a difference of opinion on political matters, but rather, ‘bitterly cling to God and their guns’.

They know that banning conservative speakers from college campuses is the right thing to do because universities shouldn’t be a place of diversity of thought and opinion where there is free and open debate. No, a college campus is where you learn the ‘right’ things. And the ‘right’ things always fall under the heading of Leftist dogma.

And how do they know all these things?

This meme gives a clue: 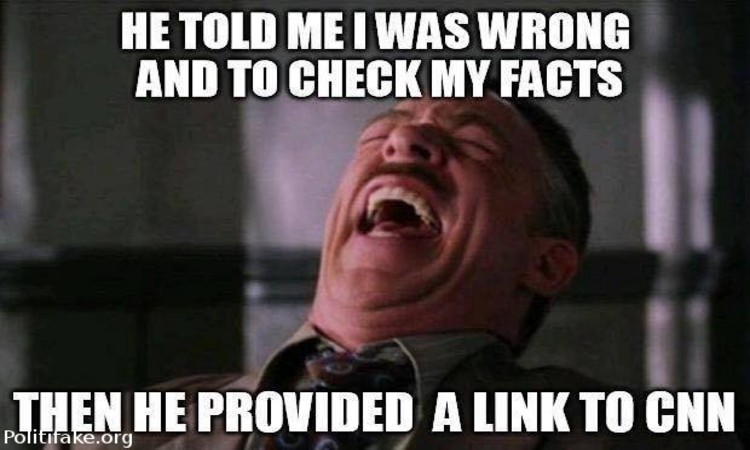 Well, that explains it, doesn’t it?

Imagine, getting all your info from CNN!

What concentric circle of hell is that?