Children look under their bed for the Boogey Man. ISIS looks under theirs for this guy.
Is he a war criminal or a hero taking a stand against a great evil?

We have already established that ISIS are cowards.

They don’t mind blowing themselves up. (Well, some of them.)

But we aren’t seeing any desperate last stands by ISIS.

We see them hiding among women and children hoping that we value the lives of civilians more than they do. And cowering among civilians in fear of US airstrikes.

This guy, who is having a very laid-back conversation while something is burning behind him is speaking a language they understand. 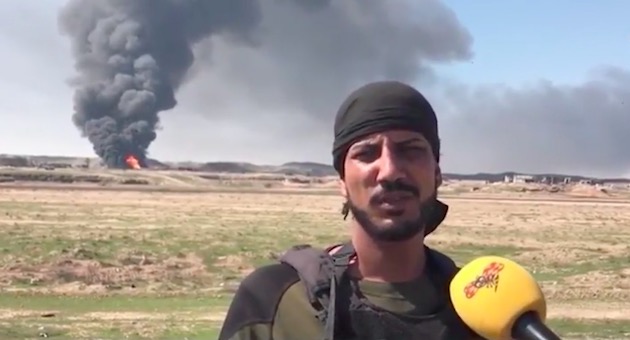 Aziz has been accused of committing war crimes in his hunt for fanatics and their supporters – but he has defended his actions, insisting: ‘Every day, I swear, I slaughter them, as they’ve slaughtered us.’
He added: ‘You don’t know what you’re going to do. What they did to us, we must do to them.’

His answer to those who call him barbaric is sobering. You don’t know what you would do until you’ve suffered what they have suffered.

Nobody attempts to stop him and some even cheer once he has finished, describing him as ‘the who’s slaughtering ISIS’. He responds, telling the camera: ‘This is your blood, you dogs.’
Speaking to Expressen, he said the beheaded man had been captured in a toilet block. He told war correspondent Magda Gad how it felt to cut someone’s head off.
‘Just that feeling, I can’t explain how at ease I am with it,’ he said.
After watching the footage, Donatella Rovera from Amnesty told Expressen it showed ‘war crimes being committed’ and called on Iraqi authorities and the international community to investigate.
But Aziz said: ‘They (ISIS) have driven us to it. What they’ve done has killed our compassion. Finding your brother slaughtered, or your mother slaughtered. What are you going to do? You don’t know what you’re going to do. What they have done to us, we must do to them.’

We knew you would.