You don’t have a lot of options when you’re being charged with a bear. This kid had to think fast. He did and it saved lives!

Before the animal rights activists start wagging their fingers about ‘making noise’ and ‘bear spray’ they might want to see this funny video. It was about a grizzly that just wandered too close, and wasn’t even charging. It didn’t do too much to bother it, really.

As for the other ‘peaceful’ bear-deterrent tactics, the ones activits might approve of, they fail too. We’ve got a fatally mauled teen and a park ranger who miraculously survived being attacked twice to remind us just how true that can be.

So, what does an eleven-year-old boy do when a bear is charging at a family member?

Well, if you mean this kid, he shoots the bear dead. 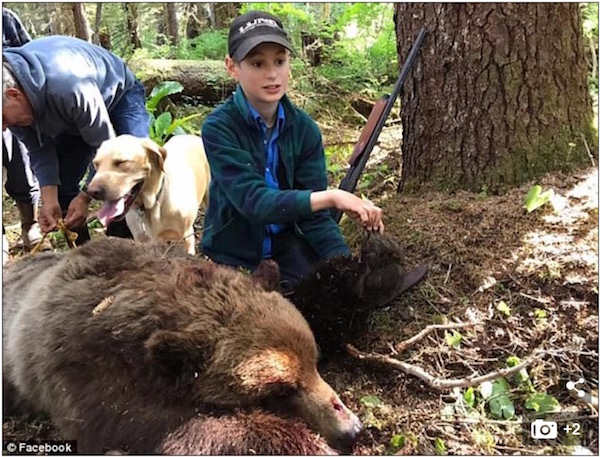 Elliot Clark was walking through the woods near Game Creek, south of Hoonah, with his uncle, cousin and grandfather for a spot of fishing last week.

…It was only thanks to Elliot’s quick response, that saved his family, after he shot down the bear as it barreled towards his cousin.
Elliot’s father Lucas Clark described the terrifying moment to Juneau Empire.
‘There was four of them in a line … my son was third,’ Clark said. ‘The bear came down the trail at them, fella in the front, who was his uncle, the bear was on him so quickly that he didn’t have time to take his rifle off his shoulder.’
Clark said that the bear ran past the boy’s uncle and grandfather, who were pushed to the side of the trail, leaving just Elliot standing between his unarmed cousin and the oncoming bear.
The boy raised his pump action shotgun and shot the beast with birdshot, hitting it in the shoulder. But the shot did nothing to slow the progress of the bear.
Elliot fired again, hitting it in the nose and neck, and again, hitting it in the shoulder and back, which finally downed the creature.
As the bear slid past him and came to a stop, he put a kill shot it him,’ his father said.
Clark said that he has extensively trained his son on how to properly use a weapon, which meant he could immediately respond to the threat.
He had also been carrying his gun in his hands, while his uncle and granddad had theirs in slings over their shoulders. —Read More

Here he is with his hero’s reward: 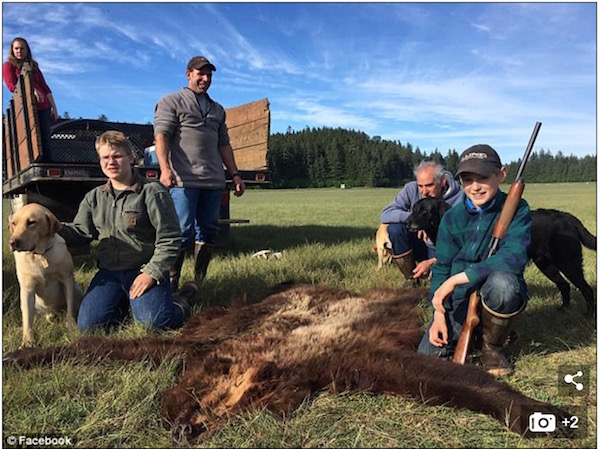