Christie was just caught covering a heap of hypocrisy with an embarrassing lie. Will it cost him?

We haven’t given much thought to Chris Christie at the national level for a while now. But all it took to change that was one question and one photo.

Let’s begin at the beginning.

New Jersey politics, if you haven’t been paying attention, are in a budget war right now.

As a consequence of that, one of their State Park beaches is closed this holiday weekend. Closed, that is to ‘the little people’.

But there was one family there: Christie’s. They are using the summer beach house provided by the state for a weekend down the Shore.

One news outlet snapped some pics with a drone.

At that news conference, Christie was asked if he got any sun Sunday.

When later told of the photo, Brian Murray, the governor’s spokesman, said: “Yes, the governor was on the beach briefly today talking to his wife and family before heading into the office.”

“He did not get any sun,” Murray added. “He had a baseball hat on.”

That’s one of those ‘picking fly crap out of pepper’ answers and we all know it. Here he is now, ‘not getting any sun’. 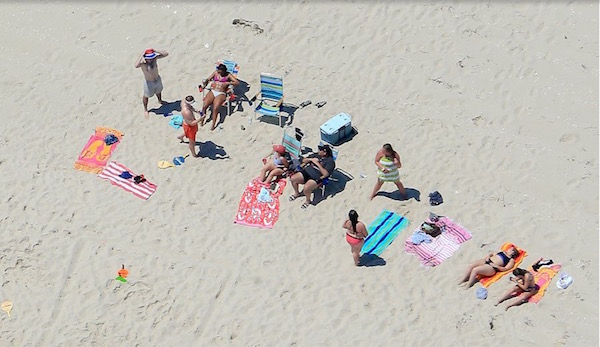 He closed the beach. But thought nothing of using the very same beach where so many people in his own state would gladly have spent THEIR sunny Sunday afternoon.

Christie told reporters Saturday that the the beach house is separate from the park and that his family will not ask for any state services.

Asked if this is fair, Christie said Saturday: “Run for governor, and you can have a residence there.” –read more

What has us really scratching our heads is why he could possibly have thought that this empty beach on a 4th of July weekend would NOT be a news story in its own right. He HAS heard of drones, hasn’t he?

Well he has now: 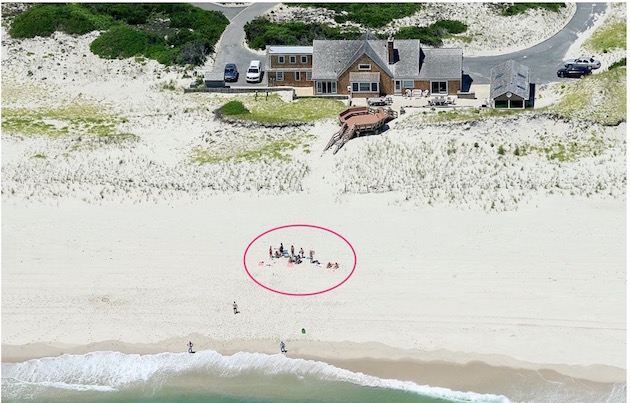 That’s one really EMPTY beach. Well, except for the ‘royals’ that are sunning themselves there.

Why are the plebes so upset, anyway?

Maybe he should add this to his summer reading. He might make fewer costly mistakes: