A former Trump advisor was questioned by a Congressional Committee and calls the Russia investigation a ‘fishing expedition’.

Michael Caputo appeared on Tucker Carlson Tonight to clear up some of the ‘Russia Hysteria’. Caputo is a former Trump advisor, and interestingly, one of the Americans sent to Russia in 1994 — by the Clinton administration — to interfere in the re-election of Boris Yeltsin.

Caputo covers the Congressional committee hearing and says that the purpose is to ‘fish’ for anything and designed to ‘delay and stop the Donald Trump agenda’.

Watch from the 6:50 mark:
https://www.youtube.com/watch?v=IempHJPjZUM

This lengthy Time magazine article chronicles the story of Felix Braynin, a friend of Yeltsin’s advisors, stepped in with ‘American help’. 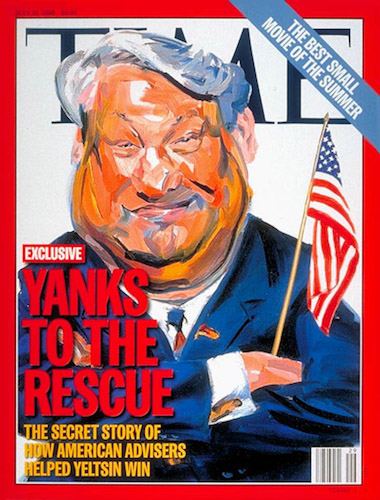 [An interesting side note is that this publication is dated July 15, 1996 — exactly 21 years ago today. How times and perspectives have changed!]

Most of Yeltsin’s confidants believed the President would be magically re-elected despite the Duma catastrophe, but Braynin thought otherwise. The President, he reasoned, could lose without the same kind of professional assistance U.S. office seekers employ as a matter of course. Braynin began a series of confidential discussions with Yeltsin’s aides, including one with First Deputy Prime Minister Oleg Soskovets, who at the time was in charge of the President’s nascent re-election effort. Finally, in early February, Braynin was instructed to “find some Americans” but to proceed discreetly. “Secrecy was paramount,” says Braynin. “Everyone realized that if the Communists knew about this before the election, they would attack Yeltsin as an American tool. We badly needed the team, but having them was a big risk.”

Who was it that was President at the time?

To “find some Americans,” Braynin worked through Fred Lowell, a San Francisco lawyer with close ties to California’s Republican Party. On Feb. 14, Lowell called Joe Shumate, a G.O.P. expert in political data analysis who had served as deputy chief of staff to California Governor Pete Wilson. Since Wilson’s drive for the 1996 Republican presidential nomination had ended almost before it began, Lowell thought Shumate and George Gorton, Wilson’s longtime top strategist, might be available to help Yeltsin. They were–and they immediately enlisted Richard Dresner, a New York-based consultant who had worked with them on many of Wilson’s campaigns.

Dresner had another connection that would prove useful later on. In the late 1970s and early ’80s, he had joined with Dick Morris to help Bill Clinton get elected Governor of Arkansas. As Clinton’s current political guru, Morris became the middleman on those few occasions when the Americans sought the Administration’s help in Yeltsin’s re-election drive. So while Clinton was uninvolved with Yeltsin’s recruitment of the American advisers, the Administration knew of their existence–and although Dresner denies dealing with Morris, three other sources have told Time that on at least two occasions the team’s contacts with Morris were “helpful.”

That doesn’t mean Bubba was involved, though, right?

The article says he wasn’t, ‘So while Clinton was uninvolved with Yeltsin’s recruitment of the American advisers, the Administration knew of their existence…‘ but then goes on to say this:

Communicating in code–Clinton was called the Governor of California, Yeltsin the Governor of Texas–the Americans sought Morris’ help. They had earlier worked together to script Clinton’s summit meeting with Yeltsin in mid-April. The main goal then was to have Clinton swallow hard and say nothing as Yeltsin lectured him about Russia’s great-power prerogatives. “The idea was to have Yeltsin stand up to the West, just like the Communists insisted they would do if Zyuganov won,” says a Clinton Administration official. “By having Yeltsin posture during that summit without Clinton’s getting bent out of shape, Yeltsin portrayed himself as a leader to be reckoned with. That helped Yeltsin in Russia, and we were for Yeltsin.”

The American team wanted Clinton to call Yeltsin to urge that he appear in his ads. The request reached Clinton–that much is known–but no one will say whether the call was made.

The President of the United States willingly allowed himself to be lectured by the Russian President to show the Russian people that their leader was ‘powerful’.

I wonder how they’d feel if they knew it was all scripted — like the WWE.

A bit of relief came when a CNN correspondent reported that “the only thing voters we’ve spoken with like less than Yeltsin is the prospect of upheaval.” Dresner howled. “It worked,” he shouted. “The whole strategy worked. They’re scared to death!” After months being cooped up in the President Hotel wearing blue jeans, sneakers and PETE WILSON FOR PRESIDENT T shirts, the Americans headed for the building where Russia’s central election commission would be announcing the results as they came in. “The hell with security,” Dresner said. “I want to see this.” And there they sat near the back of the auditorium, six guys in suits with computer projections in their hands and a lap-top computer. The place was overrun with reporters, but Yeltsin’s secret American advisers were never recognized.

The final tally for the first round showed that Yeltsin had edged out Zyuganov 35% to 32% (the Communists had indeed been held to the level they reached in December). Gorton began drafting a memo designed to guide Yeltsin’s remarks, and Dresner began plotting 20 emergency focus groups to determine what voters were thinking. In less than an hour, another memo was written urging the quickest possible runoff date. “We’ve got to try and keep Zyuganov from capitalizing” on the first round’s surprise tightness, Shumate said. “July 3 would be good,” said Gorton. “That’s about as soon as possible, and it’s in the middle of the week so that people will be in town rather than at their dachas.” “We need turnout,” Dresner said over and over. “We’ve got to have turnout.”

Why was it so close?

It has some weird similarities to a more recent election:

Why, with unlimited funds, expert advice and the media in his pocket, did Yeltsin win the first round by only three points? The Americans identify several points:

–The continuing underlying hostility toward Yeltsin. “He never overcame the fact that most Russians can’t stand him,” says Dresner. “Anyone but a communist would probably have beaten him.”

The article continues to enumerate points:

You’d think that with her husband complicit in the hacking of Russia’s election that Hillary would not have made exactly the same mistakes as Yeltsin.

But, to be fair to Yeltsin, though that first ballot was a squeaker, he did win it — unlike Hillary.

We do know that Hillary learned some lessons, though.

Look at how she colluded with the DNC to change the course of the Democratic Primary to defeat Bernie Sanders. The WikiLeaks email documents are pretty clear on that. Don’t forget, it cost Debbie Wasserman Schutz her job.

It may have also cost Hillary the Oval Office.

But the Media (D) won’t report on that.

Just like they won’t report on the real collusion between Hillary’s camp and Ukranian officials to get the Trump ‘Golden Showers’ Dossier.

And why does this happen?

Last week Russia took a historic step away from its totalitarian past. Democracy triumphed–and along with it came the tools of modern campaigns, including the trickery and slickery Americans know so well. If those tools are not always admirable, the result they helped achieve in Russia surely is.

And here is the Media (D) admitting that the ends justify the means.

Because if they really condemned election tampering, they’d have to go after Obama and the Clintons, too.