Scottie Nell Hughes is now claiming that Charles Payne had raped her in 2013 and has filed a new lawsuit.

Payne had been suspended pending the investigation into claims of sexual harassment and had just returned to host his show, Making Money, on Fox Business Network less than two weeks ago.

“However painful it is to expose the fact that she is a rape victim, and knowing that the Fox PR machine will follow through with its threats to reveal more personal emails, Ms. Hughes cannot allow Fox to victimize her a second time by trampling on her reputation and ruining her career in order to promote the actions of a male on-air talent,” lawyers for political analyst and former frequent FBN guest Scottie Nell Hughes says in the seven claim complaint filed in federal court on Monday.

The allegation of rape stems from an alleged incident that occurred in July 2013 in Houghes’ New York City hotel room.

The lawsuit does assert that there was a ‘consensual relationship’, (as confirmed by emails sent from Houghes to Payne,) that continued after the 2013 incident but labeling their continued interaction an ‘affair’ is ‘misleading.

Both Payne’s attorney and Fox News refute the claim. Fox News calls the new lawsuit ‘downright shameful’ and a ‘publicity stunt’ with ‘absolutely no merit’.

“The latest publicity stunt of a lawsuit filed by Doug Wigdor has absolutely no merit and is downright shameful,” said a Fox News spokesperson to Deadline on Monday. “We will vigorously defend this,” the cabler newser stated.” It’s worth noting that Doug is Ms. Hughes’ third representative in the last six months to raise some variation of these claims which concern events from four years ago, since it apparently took some time to find someone willing to file this bogus case,” Fox News adds.

The attorney for Charles Payne also made a statement:

“My client Charles Payne vehemently denies any wrongdoing and will defend himself vigorously against this baseless complaint,” said Jonathan Halpern of Foley & Lardner LLP today. “We are confident that when the evidence is presented in this case, Mr. Payne will be fully vindicated and these outrageous accusations against him will be confirmed as completely false.”
Source: Yahoo

It could get VERY embarrassing if they were ever to come to light. Like these ones are certainly bound to…

Scottie Nell Hughes, an occasional news pundit for Fox News and Fox Business host, Charles Payne were involved in a three-year affair. Both Hughes and Payne are married.

Payne has been suspended by Fox due to allegations that he sexually harassed Hughes. He admits to the affair but denies that Hughes was coerced in any way, calling it ‘an ugly lie’. 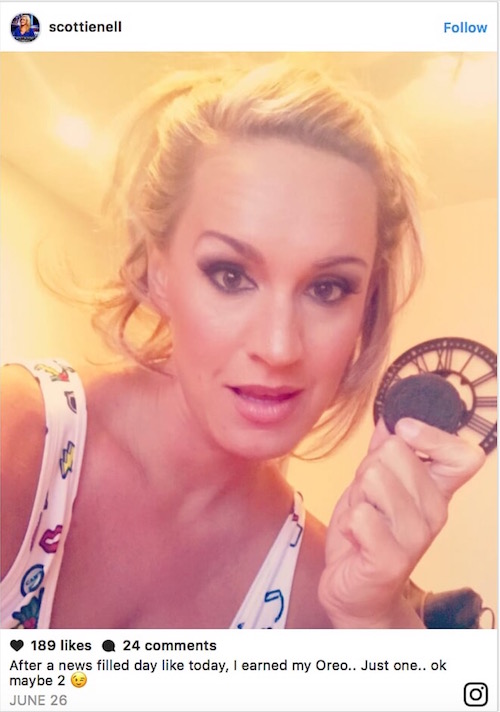 Earned an oreo? Let’s have a look and see if she’s earned anything more than the public’s contempt.

They are from Hughes to Payne and are pretty graphic.

Red Alert Politics has exclusively obtained emails exchanged between Hughes and Payne, and verified by two separate sources, that may cast doubt on Hughes’ allegations. In one email to the Fox Business host, Hughes described a sexual fantasy of hers about what they would do together.
In the exchange on September 3, 2013, near the beginning of their relationship, Hughes sent Payne a graphic e-mail in which she discussed a recent sex dream she had involving the two of them in a swimming pool. 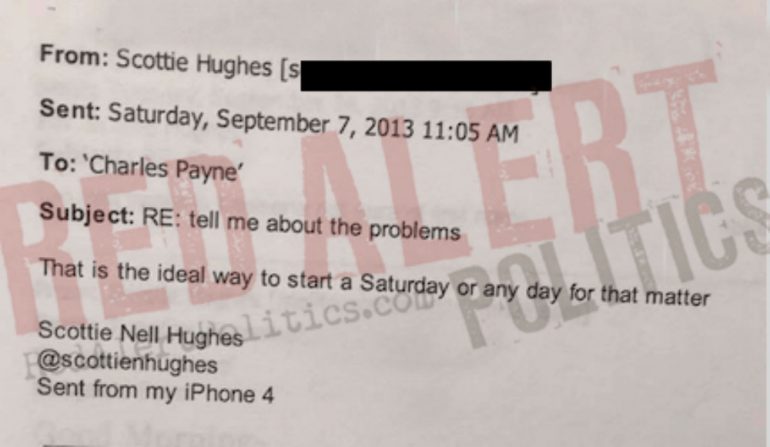 Red Alert Politics that published images of the emails, spoke to Kristina Lee Hall that worked with Hughes at the Tea Party Network. Hall claims that Hughes has been known to sleep with men that might advance her career.

In a conversation with Red Alert Politics, one of Hughes’ former colleagues, who wished to remain anonymous, called her a “female predator.”

According to Kristina Lee Hall who worked with Hughes at the Tea Party News Network, Hughes was famous for sleeping with well-connected men who ran or controlled conservative PACs and websites. Lee asked us to keep the men’s names anonymous.

Hall recalls a trip to New Orleans for a conference and she recounted this story:

‘I shared a room with her, she thought that the (the Tea Party leader) could get her places, and this is the first time I really spent one-on-one time with her. She was all over (the Tea Party leader). She wanted to go to his hotel room to get ready for the conference because we had been out on Bourbon Street and stuff like that. I had to physically leave the room, the hotel room, because they were under the covers in his bed pretty much getting ready to full getting it on. I was uncomfortable and left, she came back to our shared hotel room at two or three in the morning, hair completely disheveled.

That was in October 2012, then from there we went to Vegas because we were watching election night war room live video, so when we got to Vegas (the Tea Party leader) had a girlfriend, and he was leading them both on,” Hall continued. “Then (a nationally syndicated radio host) got there, and they disappeared. Well, I had access to her room because I was trying to help the whole war room going for the election night. I walked in on her and (the nationally syndicated radio host)… they jumped off the bed, his pants were undone, half of her clothes were off, his hair was disheveled.’

This looks like a pattern of behavior for Hughes, doesn’t it?

Even if there was coercion, her past actions are casting that in considerable doubt.

Payne admitted to the affair on Wednesday but is fighting back the allegations that there was coercion or threats.

The affair was no secret, with the pair boldly sharing a hotel room in May 2015 in Las Vegas on a company trip to The Money Show in Las Vegas.

Hughes also attended Payne’s birthday party at his home in 2015. The behavior of the couple made Payne’s wife uncomfortable and she spoke to now ousted Fox News President of Programming, Bill Shine about it. Shine then barred Hughes from appearing on Fox News or Fox Business.

The disgruntled Hughes reported the affair to the law firm representing Fox News and is now claiming that the ‘blackballing’ is because she was coerced into the relationship and alleged threats of reprisals. She also told her lawyers that she stayed in the relationship because she thought it would help her land a permanent gig at Fox News.

Hall told Red Alert Politics, “That is literally her pattern, to sleep with, do stuff with, to get ahead.” Hall then recounted how a 22-year-old man who worked with her and Hughes showed her photos of himself and Hughes in bed together. He claimed he took the pictures to impress his college frat brothers.

“It was so hard working with her because she was constantly playing the ‘I’m the best Christian southern woman, my children, my husband,’ but the whole time we saw her carry on multiple conversations on her phone with multiple guys,” she continued.
Source: Red Alert Politics

And this is why character matters.

Just ask Anthony Weiner about that.

Protect your girls from being someone who tries to sleep her way to the top, or being preyed upon by perverts: