Happy warrior that he is, he breaks things down in a matter-of-fact (and hilarious) way.

“The first time you blow someone away is not an insignificant event. That said, there are some assholes in the world that just need to be shot.”

“I come in peace. I didn’t bring artillery. But I’m pleading with you, with tears in my eyes: If you fuck with me, I’ll kill you all.”

“Find the enemy that wants to end this experiment (in American democracy) and kill every one of them until they’re so sick of the killing that they leave us and our freedoms intact.”

“Be polite, be professional, but have a plan to kill everybody you meet.”

“The most important six inches on the battlefield is between your ears.” —Free Beacon

What did he say about ISIS? 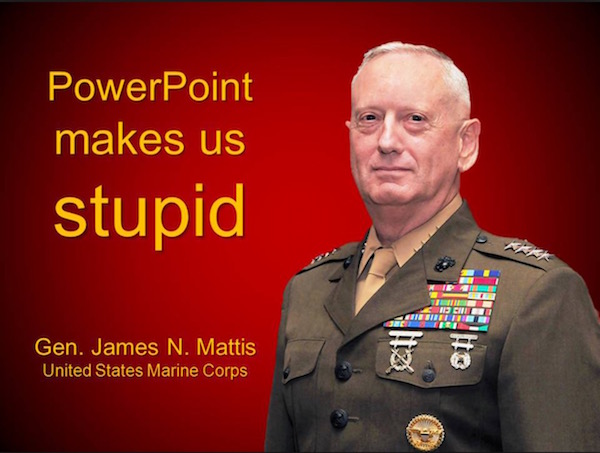 Don’t you just love this guy?

Related: HILARIOUS: This Pic Of ‘Saint Mad Dog Mattis’ Is MELTING The Internet