If Trump is ‘encouraging violence against reporters’ with this silly clip what were those now-fired CNN employees doing?

Or the other ‘journalists’ that are telling anti-Trump stories that even THEY are calling BS on?

Remember way back before Trump was our duly-elected President?

It seems like a long time ago already, doesn’t it? Of course, it would, what with the networks ringing the alarm bells since, basically, November 9th.

Before that, he was a celebrity in the more ordinary sense of the term. Fabulously wealthy, sure. But also knew his way around the media, to work it to build his brand.

One time, he was even involved in a promotional Wrestling match, where he gave Vince McMahan ‘a beating’. Those video clips still make the rounds sometimes.

After the credibility beat-down CNN has had between inauguration day and now — headlines are now mocking CNN’s slogan as ‘The Most Busted Name In News’ someone online put those two ideas together, with CNN on the losing end of the matchup. The guy Trump ‘beat’ has his face covered, with the CNN logo in its place.

Wrestling — as we probably need to remind anyone who still takes CNN seriously — is completely Staged. Or to say it in anther way ‘fake news’.

Journalists are now fearing for their lives. Or something. 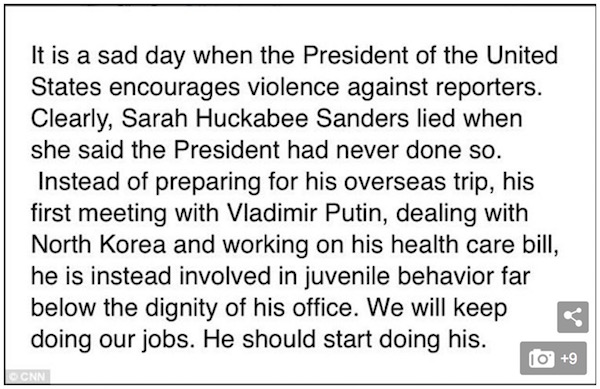 “We will keep doing our jobs?” They say? That’s hilarious.

If you WERE doing your jobs, instead of pushing an endless assault on the duly-elected President who happens to oppose the person YOU tried to get the public to vote for.

We know about all the connections between the networks and the CNN. That’s why we call you fake.

They hardly bat an eye when Michael Moore tries to call for an uprising.

Or when Democrats make transparent attempts to ACTUALLY usurp power and disenfranchise half the country by undoing the results of the last election. Again, and again and again.

Or when Hollywood uses the language of war in their Resist movement. Or mock executions of Trump — including beheadings. Or the very realistic one in Shakespeare in the Park.

But let Trump tweak the media with a silly meme, and they lament as though Ceasar has just marched an army across the Rubicon.

Grow up, CNN. Do your jobs. Report the news instead of inventing it whole cloth. Hit BOTH parties equally hard and we will treat you like a news network.

If not, you’ve earned the ‘American Pravda’ moniker, and all the contempt that goes with it.