The racially divided mess at Evergreen College was discussed recently in a meeting with the board, faculty, and students. One student’s testimony sheds a shocking light on the events last spring.

As a refresher, last spring Evergreen State College students decided that their annual ‘Day of Absence‘ was going to be an ousting of all white students and faculty from the campus for a day. The ‘Day of Absence’ is described on the Evergreen College website as a day when students bring attention to minorities by ‘voluntary identity group gatherings’ and anti-racism topics are discussed off-campus. The sudden reversal of the ‘off-campus’ portion meant that all white people had to leave. Or else.

So much for ‘voluntary’.

One Biology professor, Bret Weinstein, rather politely refused and said he wouldn’t be forced off the campus. He wrote this:

There is a huge difference between a group or coalition deciding to voluntarily absent themselves from a shared space in order to highlight and under-appreciated roles (the theme of the Douglas Turner Ward play Day of Absence as well as the recent Women’s Daywalkout) and a group or coalition encouraging another group lo go away, The first is a forceful call to consciousness which is, of course, crippling to the logic of oppression, The second is a show oi forceand an act or oppression in and of itself.

The campus was taken over by leftist activists and had the College President bowing to their every whim. The whiny, entitled brats refused to leave the office of the college President, they even demanded no homework and gumbo.

It is everything that is wrong with Progressive college campuses in America.

“We are hearing this issue raised all over the country, not just at Evergreen,” faculty member Anne Fischel said at the meeting.

She told the board she believes students protested out of frustration with their experiences in classes and institutional barriers to equity.

“Students take actions like this when systems of power and decision-making are inaccessible to them,” she said. “They do it out of need, out of pain and out of anger.” 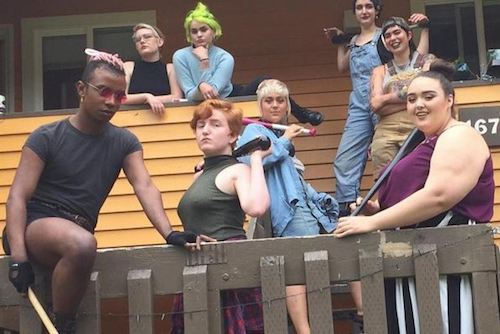 Here is video and you can see one of the bat-wielders at the end.

The video was filmed by a freshman named Nolan who is part of a group that is writing controversial and subversive messages on campus like ‘We want to learn‘ and ‘College is not a safe space‘. This is what rebellion is in 2017 — pushing back against the progressive faculty’s appeasement of students that have taken over the campus.

One of the students, McKenzie Kyger, testified and said that the campus wasn’t safe for white students and that she’s been called a racist and a ‘white supremacist’:

“This behavior has actually been encouraged and because of this, I feel like people are becoming more violent and the campus is becoming more of an unsafe place,” said student McKenzie Kyger. “I have been to several meetings to speak. I’ve been told several times that I’m not allowed to speak because I’m white. This school seems to focus so much on race that it’s actually becoming more racist in a different sort of way.”

Weinstein posed a series of questions to the trustees, including asking if they knew the college was under the control of protesters, not the state, for several days.

“If you did fully understand what happened, you would be forced to act in the interest of Evergreen,” he said.

Weinstein said some faculty members and administrators were, by legal definition, kidnapped and imprisoned by the protesters during the disruptions. He said people were pressured to not report crimes they witnessed on campus.

What do you think of the situation at Evergreen State College?

Is McKenzie Kyger right that the school has ‘focused so much on race that it has become racist’?

Do you think that the constant focus on race is helping or hurting race relations in America?

Do you think that the constant focus on race is helping or hurting race relations in America?

Congrats to McKenzie Kyger for standing up and saying the hard things that need to be said.

McKenzie, we think you’re a hero for putting yourself in those hateful crosshairs!