Seventeen shot, others trampled and some even jumped out of second-story windows after an ‘exchange of gunfire’ in the club.

Rapper Finese2Tymes had his June 30 show in Little Rock Arkansas go horribly, horribly wrong. And one guy who was streaming it live caught the chaos as it unfolded.

Understandably, the screen goes black while the owner is scrambling for his life, but the sound is all there. And the picture does come back later on.

‘They got shot, man. I don’t know where they hit it,’ a man can be heard saying.
The concert is in full flow when the shots ring out without warning. People can be heard screaming as the screen goes black and people rush outside.
In the aftermath, blood is seen splattered on the ground, along with a ticket and a discarded pair of shades.
Rankin is seen showing the blood on his clothing; a man is heard saying that he ‘can’t move’.

…Nobody has been arrested; police say that they have several suspects in the shooting.
However, by 9am Saturday morning, some were left frustrated that the shooters had still not been apprehended.
‘I guess the no snitching rule is in effect even after 17 people were shot @ Power Ultra Lounge,’ local Stefan Robinson wrote on Facebook. ‘We need to take our city back.’ —
read more

The image with which his show was promoted — one that was pretty ordinary for the genre — is suddenly getting more attention than it normally would have. The reasons should be pretty obvious. 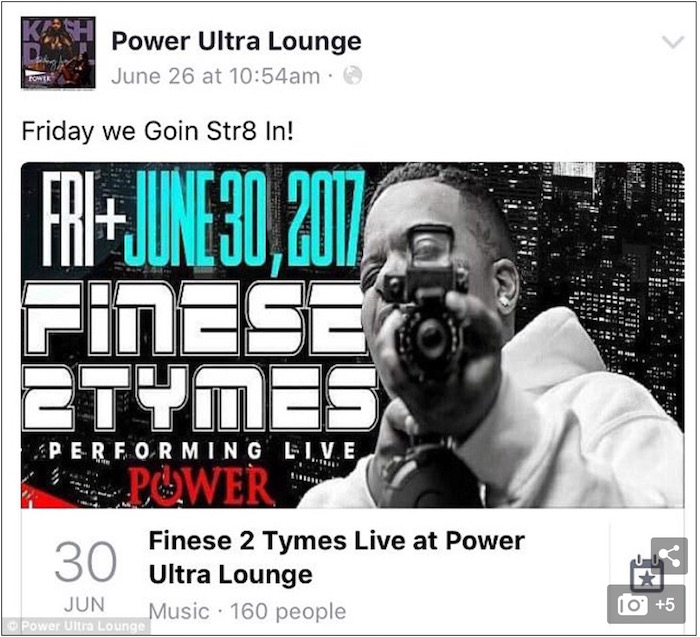 Victims ranged in age from 16 to their twenties.