The same Senator John McCain that Democrats, and the press, mocked and derided and called every unprintable name imaginable is ‘suddenly’ hailed as a heroic man of principle. Like magic.

The man whose failed run AGAINST Obama gave us Obamacare in the first place, now placed the critical vote that prevents Republicans from rolling it back.

You can almost hear the chortling glee: 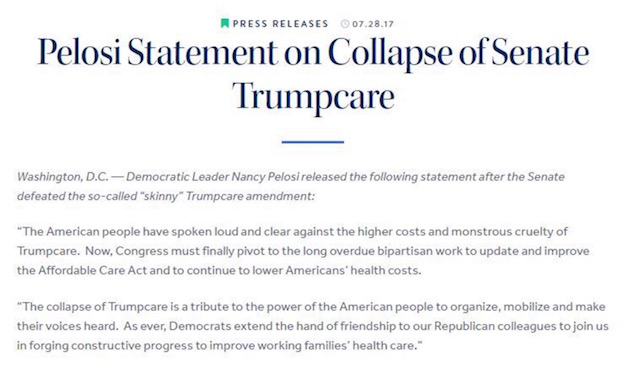 It reminds us that there is more than one kind of courage.

One kind of courage — the kind we see on the battlefield — nobody can question him on. He’s answered that question long ago.

The moral courage to do the unpopular thing, to take a stand contrary to the one your financial backers (like Soros) would pressure you to take is quite a different creature.

Money? Peer pressure? Praise? It’s hard to say what his price was, but it looks like someone paid it. And now the democrats and Hollywood elites are cheering.

Cher said: ‘God Bless John McCain, Susan Collins and Lisa Murkowski. Alaska Strong.
‘Obamacare needs changing now the Democrats and the Great Old Party can work together to fix it.’
She also poked fun at the President saying McCain was a hero who risked his life for America fighting in Vietnam while Trump hid in New York.
John Legend also backed McCain’s decision but stopped short of calling his actions heroic.
He said: ‘Thanks to the Senators who voted to kill that stupid, heartless bill. Let’s stay vigilant. It’s not over. —DailyMail

If you want to see just HOW hypocritical the Left is, here is one of Cher’s gloating tweets:

SO MUCH 4 trumps Dis of Hero John McCain
″ I LIKE PEOPLE WHO WERENT CAPTURED“
Senator McCain Risked His Life in Vietnam
????Trump Hid In NY

Sound like she supports McCain and his service? Think again.

She’s digging into history to score points. Nothing more.

Maybe Cher has forgotten that McCain is one of the people she and her movement would have demonized as ‘baby killers’ during her protests against Vietnam. Cher was part of the REASON returning soldiers came home to vitriol and contempt.

No. McCain just a ‘useful idiot’ a tool she can wield against the duly-elected President and the mandate that some guy named John McCain ran on way back in 2016.

Did you catch that, at the 26-second mark?

“John McCain is ‘leading the fight’ to Stop Obamacare.”

The same man of ‘principle’ who — because he’s a Senator — need not go to the VA to get the health care he needs, is moving the ball forward for the whole COUNTRY to get ‘healthcare’ like the VA has to offer.

Weigh that against what Ted Cruz said:

Mark my words, this journey is not yet done.
‘For seven years Republicans have campaigned on one central message that we would repeal the trainwreck that is Obamacare,.
‘The losers tonight are the people who believed in the democratic process, believe that actually when candidates run and say: ‘I will fight to repeal Obamacare’ that that actually means they will fight to repeal Obamacare.’ —

We The People gave Republicans a triple mandate for a reason — becuase we wanted results.