What does Women’s March leader and Muslim ‘Feminist’ Linda Sarsour have to say about THIS?

Sarsour has said that Saudi Arabia has great women’s rights, and said the focus should be on their fantastic maternity leave, not the insignificant issue of allowing women to drive. 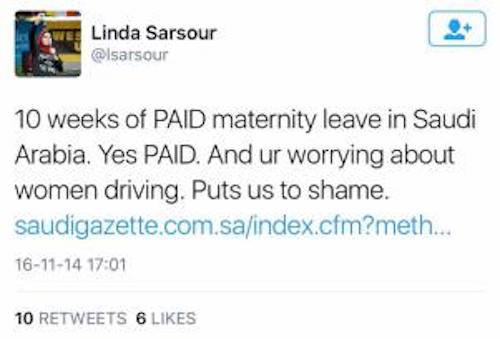 Why continually bring up a driving ban against women that occurs in only one country in the entire world?

Here’s the story of the woman that took on that driving ban — and the massive cost that she had to pay.

But, unlike Sarsour that shouts about oppression and her jihad against the ‘fascists, white supremacists, and Islamophobes in the White House’, Al-Sharif gained international attention when she challenged a sexist law and was arrested.

In 2011, she decided to get behind the wheel and post a video of herself driving on YouTube.

She was arrested and jailed for 9 days.

(It is important to note that Al-Sharif had a legal driver’s license from the United Arab Emirates.)

The official charge: ‘Driving while female’.

‘I was jailed because I challenged the ban,’ she said.

‘I lost custody of my son, my job and my home but I just have to accept the consequences otherwise women don’t move forward.

‘I’ve done a lot of things in my life I regret but I didn’t choose to be arrested for driving. I was tired of accepting these awkward rules so I wanted to prove a point.

‘When I was sitting in prison, the only regret I had was not being with my son at the time when he was in hospital.’

Al-Sharif protested the driving ban, but she wasn’t the first one to do so. When the ban was initially put in place in 1990, a group of 47 women wanted to show that they were competent to drive, but they were all arrested when they got behind the wheel.

The young mother said she was faced with relentless backlash after the video attracted more than 700,000 views within 24 hour.

‘The video was trending inside Saudi Arabia,’ she said.

‘I was getting phone calls, my family was receiving death threats and more girls were being discouraged to go out.

‘Driving a car as a woman, you really stir the whole country. I was called a w**** and people accused me of corrupting Muslims… They called me all kinds of names.

‘People were calling me crazy and saying I should be locked up in a mental hospital.’

But despite holding a driver’s license, Ms Al-Sharif said women were still not allowed to drive simply because they were ‘legally minors’ in the country.

Where are the feminists screeching about ‘The Patriarchy’!

An adult woman is treated like a minor in Saudi Arabia.

‘It doesn’t matter if you’re a highly educated woman, you still need a male guardian to give you permission to do things,’ she explained.

‘The main challenge is women are treated like minors. Once you reach 18, you own your life, no one should own your life. But in Saudi Arabia, [adult] women are still considered as a minor.

‘I had to go to my father to get my passport.’

Al-Sharif has moved to Australia and remarried.

As a matter of fact, she had to have her father’s permission to remarry because the man she married isn’t from Saudi Arabia.

Her son even paid a price at the tender age of 6 when he was being beaten at school.

When they learned of it, they changed schools. But that was also the catalyst for Al-Sharif to write her book, ‘Daring to Drive‘.

After all that she went through, including losing custody of her son, does she think it was worth it?

‘Women are still being treated as slaves in 2017,’ she said.

‘I will never give up. The rain begins with a single drop. I just want to end the longstanding awkward laws imposed on women in my country.

‘To me, women equality is to be in good dignity, to be herself without the permission from anyone.