It looks like all of the ‘journalists’ in The Media (D) completely forgot about THESE stories amidst the Don Jr.-Russia Hysteria.

ClashDaily has already pointed out the Hillary-Russia connection that the Media (D) ignores.

And of course, there’s the Hillary camp’s ‘collusion’ with the Ukraine that the Media (D) ignores.

Instead, we’ve all heard about Don Jr.’s meeting with a Russian lawyer and several others during the campaign to get dirt on Hillary.

It’s driving the ratings of the Media (D) these days, but even they know it’s B.S.

Besides, we’re not actively hostile with Russia, are we? Obama and Hillary did a ‘reset’ and everything.

The Don Jr. story has been thoroughly covered, so we won’t get into all the nitty-gritty. If you need catching up, watch CNN for 5 minutes and you’ll be up to speed. It’s like 90 percent of their coverage.

If you don’t want to subject yourself to CNN for any length of time (which is understandable), here are Mark Steyn and Tucker Carlson doing a great job summing up:

Instead, we’ll take the ‘Way Back Machine’ and check out some other ‘collusion’ stories that The Media (D) seem to forget about. 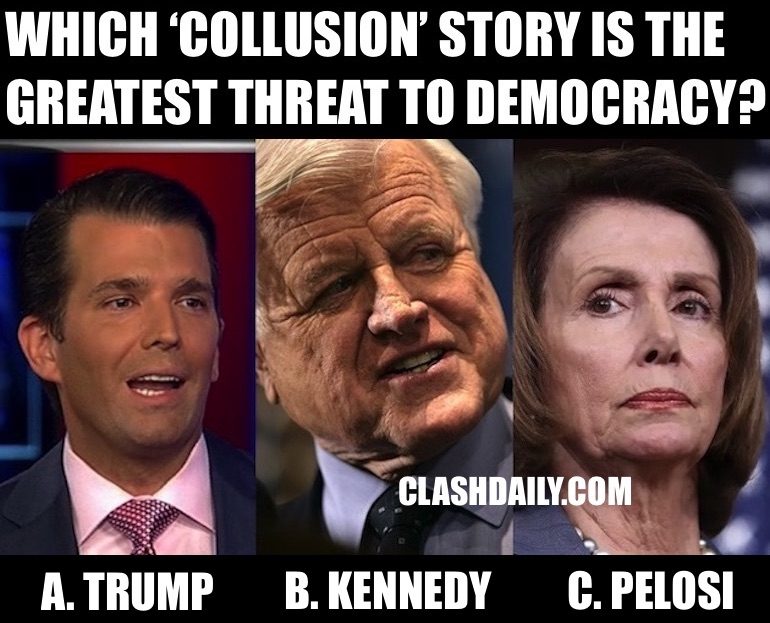 Ted Kenned And The KGB

In 1991, a reporter for the London Times, Tim Sebastian, found a memo while he was searching through Soviet archives that Boris Yeltsin had opened up. He found something that was shocking. A memo from 1983 from the head of the KGB.

Composed in 1983 by Victor Chebrikov, the top man at the KGB, the memorandum was addressed to Yuri Andropov, the top man in the entire USSR. The subject: Sen. Edward Kennedy.

“On 9-10 May of this year,” the May 14 memorandum explained, “Sen. Edward Kennedy’s close friend and trusted confidant [John] Tunney was in Moscow.” (Tunney was Kennedy’s law school roommate and a former Democratic senator from California.) “The senator charged Tunney to convey the following message, through confidential contacts, to the General Secretary of the Central Committee of the Communist Party of the Soviet Union, Y. Andropov.”

Kennedy’s message was simple. He proposed an unabashed quid pro quo. Kennedy would lend Andropov a hand in dealing with President Reagan. In return, the Soviet leader would lend the Democratic Party a hand in challenging Reagan in the 1984 presidential election. “The only real potential threats to Reagan are problems of war and peace and Soviet-American relations,” the memorandum stated. “These issues, according to the senator, will without a doubt become the most important of the election campaign.”
Source: Forbes

Kennedy had some specific proposals for Andropov. He suggested:

– he would visit Moscow

– he insisted the interviews look as though they were initiated by the American media, and would ‘rig’ them to look like ‘honest journalism’

Why did he do it? The memo says because of his ‘concern’ for the rising tensions between the US and the USSR.

But that’s a minor factor, amirite?

When President Reagan chose to confront the Soviet Union, calling it the evil empire that it was, Sen. Edward Kennedy chose to offer aid and comfort to General Secretary Andropov. On the Cold War, the greatest issue of his lifetime, Kennedy got it wrong.

Just think of what would have happened if had Kennedy succeeded.

I’m old enough to remember when Bashar al-Assad was viewed as a Terrible, Horrible, No Good, Very Bad man.

Pelosi, who was Speaker at the time, decided to go to Syria and chat with Assad herself — because it was time to negotiate. She did so against the wishes of President Bush.

Here she is showing her full denture smile as she meets the Syria’s President Bashar al-Assad.

“The road to Damascus is a road to peace.” Those were damning words. When Nancy Pelosi embraced Bashar al-Assad in April 2007, she wasn’t simply challenging the commander-in-chief during a war; she was propagandizing for a dictator who was killing Americans…

…With the tacit approval of the Syrian regime, between 2005 and 2008, foreign jihadists flooded along the arterial highways that connect eastern Syria and western Iraq. Once in Iraq, they joined up with facilitators from the Islamic State’s precursor, al-Qaeda in Iraq (AQI). The zealots were then assigned to murder American soldiers and Marines. And AQI was responsible for particularly gruesome crimes…

…President Bush was (for the reasons outlined) firmly against Pelosi’s trip. Second, State Department briefings do not signify endorsement of travel. They simply reflect State’s rightful need to inform U.S. representatives and ensure their safety. Nothing changes the fact that Speaker Pelosi — third in line to the presidency — praised an American enemy while he was helping to murder Americans and attack U.S. interests.
Source: National Review

Pelosi has continued with her bizarre behavior and is shockingly still holding public office despite her strange press conferences and near-constant messing up of the language.
Half the time she refers to President Trump as President Bush.

Seriously, folks, there’s got to be somebody in California that can run against her. She’s a mess!

Looks like the Media (D) has amnesia about these incidents of ‘collusion’.

Maybe they need a reminder.