First things first, if you’re going to film a video lecturing people on their behavior, MAKE YOUR FREAKING BED.

Second, this chick is an absolute nutcase.

But this bro handles it superbly.

You want my chicken?

Clinical research finds that people on vegan diets commonly suffer from a variety of nutritional deficiencies. One study, for instance, showed that more than half of vegans tested were deficient in vitamin B12, putting them at risk of mental health problems such as fatigue, poor concentration, decreased brain volume with aging and irreversible nerve damage.

And, sorry, Hon. The vegan diet isn’t for everyone.

Certain populations that are particularly susceptible to inadequate nutrition should think twice about veganism, including adolescents, the elderly, the poor, pregnant women, and those with psychiatric or chronic medical illnesses. A vegan diet during pregnancy also puts the fetal brain in danger of stunted development and reduced cognitive capacities later in life. While it is common among vegans to take synthetic supplements to make up for the lack of animal nutrients in their diets, studies suggest that supplements are ineffective substitutes for real food and carry significant health risks of their own. Supplements are also expensive, and people tend to take them irregularly, so while a strict vegan diet with supplements may be possible with proper medical supervision, for most people it’s neither practical nor desirable.
Source: New York Times

This genocidal rant that proposes the mass-killing of meat-eaters is because of horrible things that happen to animals on farms, right?

What about those that hunt for their meat?

Do they get killed, too?

Isn’t that a bit hypocritical?

Kill the person that is killing the animal to use for their own food instead of relying on meat raised in horrible conditions that vegans rant about?

I think we’ve just figured out what the problem is.

Vegans may live longer, but I’ll take my steak with blue cheese instead of a handful of lettuce and some chia seeds.

Do you know why Vegans are so lonely?

Self-righteous rants like the one that was sufficiently smacked down by that bro. 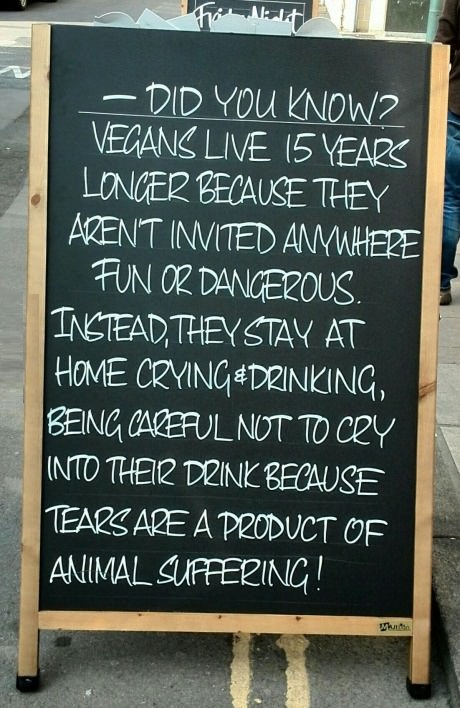