You can’t even MAKE this stuff up.

After months and months of ‘Russia collision’ nonsense, the Left is rallying around the idea of destroying Confederate monuments.

And who kicked it all off? Honest-to-goodness COMMUNISTS!

Takiyah Fatima Thompson, Dante Emmanuel Strobino, Ngoc Loan Tran and Peter Hull Gilbert have all been arrested in relation to the unlawful tearing down of the prominent Durham statue.
…According to ABC News, Workers World Party is fighting to bring about a socialist America (emphasis added):

It’s a communist party that was founded in 1959 by a group led by Sam Marcy of the Socialist Workers Party. The group supports myriad issues including anti-racism to anti-imperialist struggles.

The party is active in the Black Lives Matter movement and supports the struggles of the lesbian, gay, bisexual, transgender and queer community. The group says they’re “dedicated to organizing and fighting for a socialist revolution in the United States and around the world.”The group said it destroyed the statue hoping to “take down white supremacy.” —IJR

Let me get this straight, Democrats are following the lead of actual COMMUNIST social agitators? 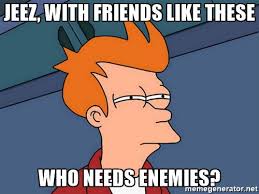 And they’re worried about Putin having an impact on VOTING booths?

Communists are now setting the tone for the Democrats’ #Resist movement.

Should THAT not concern us?

If ‘Confederates’ are bad…

Can’t we at LEAST agree…

… that Communism is at least WORSE than Confederates?

“Winter” is coming for the West, and it is going to be apocalyptic
DC Clothesline