This disgusting display of rioting brought to you by the AltLeft promoters of ‘tolerance’ — Antifa.

Or should that be ‘intolerance’?

They come with weapons and masks and ‘punch Nazis’.

Anyone that disagrees with them.

It doesn’t even need to be said how dangerous this line of ‘reasoning’ is.

If they see anyone with a MAGA hat or any sort of Trump merch — or, heck an American flag — they shout ‘Nazi go home!’ and get aggressive — pushing people around and trying to get them to leave public spaces.

This goes with the chants of ‘Whose streets? Our sreets!’

Will the Media (D) still call them ‘peace activists’ after this round of rioting?

Violence has broken out between left- and right-wing protesters, after more than 100 black-clad masked antifa broke through police barricades at a ‘Rally Against Hate’ and assaulted at least four, including the leader of a pro-Trump conservative group.

At least ten arrests were made on Sunday in Berkeley, California after the left-wing ‘Rally Against Hate’ confronted a handful of right-wing protesters at a ‘No To Marxism In America’ rally. Antifa is short for ‘anti-fascists’.

The arrest charges in the skirmishes at Civic Center Park were various but included assault and violating a prohibition on wearing masks, KCRA reported.

The Antifa thugs were masked and wearing all black. They carried signs with cute animals that read, ‘No Hate’. 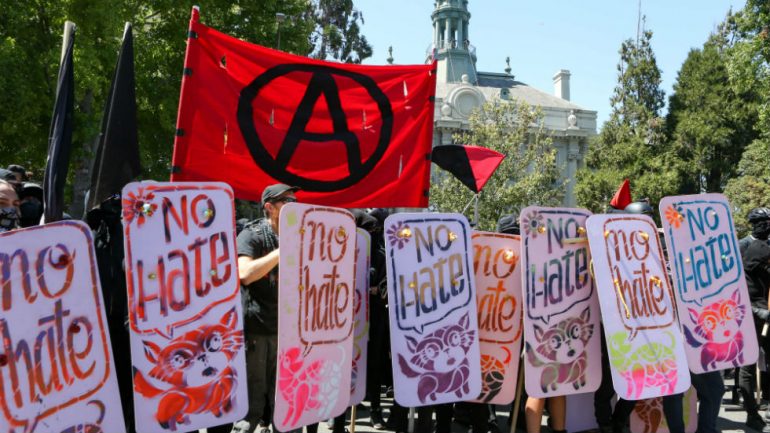 And do you see that flag that has the red and black diagonal? That’s the anarcho-syndicalist flag.

Many of these thugs are calling for a violent revolution and want to overthrow capitalism and the ‘state’.

Listen to their chant:

Yep. The worst of Communism and Anarchism combined.

Remember, Berkeley mayor, Jesse Arreguin, is connected to an Antifa-affiliated group, BAMN (By Any Means Necessary).

Here is a video from a helicopter:

Clip is from live chopper feed by @kcranews in #Berkeley. No cops seen, this is #Antifa. https://t.co/vQHUculNTX pic.twitter.com/AJvowKzbev

So white supremacist terrorists are getting stomped out ON SIGHT up in #Berkeley right now. Well the Bay Area is NOT Charlottesville pic.twitter.com/ldO5DDTkuT

A group of more than 100 masked antifa, with shields emblazoned with the words ‘no hate’ and waving a flag identifying themselves as anarchists, then broke through police barricades, avoiding security checks by officers to take away possible weapons.

Then the antifa blended in with a crowd of 2,000 largely peaceful protesters who turned up to demonstrate in the ‘Rally Against Hate’.

Among those assaulted by antifa was Joey Gibson, the leader of the pro-Trump Patriot Prayer group.

The leader of Patriot Prayer, Joey Gibson, had organized the ‘Say No to Marxism’ rally for Trump supporters.

The event was officially canceled, but some still showed up and were attacked by Antifa. This included Gibson himself. Several Antifa thugs went after Gibson and one sprayed him with pepper spray.

Gibson was made ‘internet famous’ for trying to shake hands with Antifa protesters at Evergreen College but being attacked anyway.

Although many have called Gibson a ‘Nazi’ and a ‘white supremacist’ — including by nuttier than a squirrel-turd Nancy Pelosi — Gibson flatly denies this, and it should be noted that Gibson is ethnically Japanese.

The activist has said he launched Patriot Prayer after several supporters of President Trump were beaten at a Trump campaign stop in San Jose, California last year.

After the antifa spotted Gibson at the Berkeley park, they pepper-sprayed him and chased him out of it as he backed away with his hands held in the air, escorted by a masked man wearing football shoulder pads.

Gibson and the man retreated behind a line of police wearing riot gear, who set off a smoke bomb to drive away the anarchists.
Source: Daily Mail

Gibson wasn’t the only one attacked, there were journalists attacked, and a father and son were also targetted.

You can see how the leader of Patriot Prayer was treated at the 58-second mark. The father and son getting attacked at the 2:37 mark.

Perhaps now we can label these thugs as a terror group.

Remember that these Antifa protesters are just a big ol’ bunch of losers.

Popular YouTube citizen-journalist Fleccas Talks interviewed some of these ‘winners’ back in July. It was — shall we say — enlightening.

But you know that the Media (D) idiots on the Left will continue to defend Antifa as ‘protesters’ and deny that they are thugs.

Instead, they’ll put all the blame for all of the violence on President Trump.

Without thought, reason, and devoid of wisdom.

Maybe that should be the new slogan of CNN.

Because they certainly aren’t ‘The Most Trusted Name In News’ anymore.

And they haven’t been for a loooong, loooong time.