Amy Siskind who heads up something called The New Agenda may have provided the world with the dumbest Tweet of all: 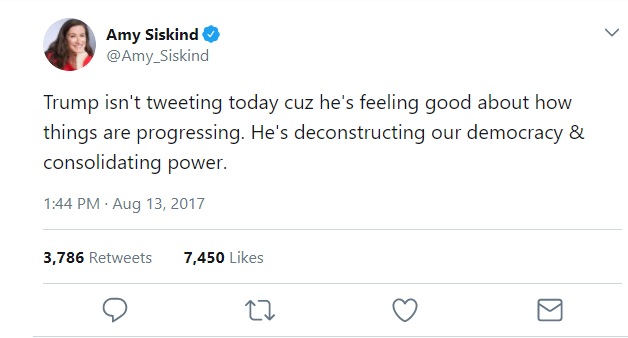 That’s right. According to Amy Siskind, Trump isn’t Tweeting right now because he thinks Charlottesville was some sort of success related to consolidation of power.

Of course if Trump Tweeted something right now, she’d be the first one complaining about whatever he Tweeted.

To be fair, Siskind’s followers responded to her Tweet – and oh so many others – with downright vile adulation. These are the kinds of people that wish Madonna had followed through with things she said she thought an awful lot about, and that cheered when a leftist tried to kill Republican members of congress on a baseball field in northern Virginia. So while Siskind comes across as a tin-foil-hat weirdo, her fans are way off the deep end.

Much of Siskind’s social media output seems predicated on the strange notion that Donald Trump is a closest fascist who is consolidating power and dismantling our democracy. In fact, she regularly posts lists of what she describes as indicators that she says proves this is so.

That’s right. She grabs items from other websites that, item by item, list things like individual Tweets the President sent out, articles about articles about things Trump allegedly said or did, and other random observations. Then she agrees that all those disparate things constitute evidence Trump is Hitler slowly completing a coup d’état in America.

It would be no different than someone collecting the quotes of say, Barack Obama. Then compiling random articles and items about Obama, and some information copied and pasted about the price of airline tickets. And finally coming out and claiming Barack Obama wanted to be an airline pilot because of all that assembled information. Yes, your hat has to roll deep with a lot of tin foil to make such thinking work.

What none of Siskind’s supporters – or Siskind herself – seem able to explain is this: if Donald Trump is consolidating power, how is it they are free to maintain an opposition presence online and say essentially whatever they want about the President? I mean, I’m pretty sure if Hitler were in power today in Germany and someone Tweeted negative things about his Reich, that person would be among the first shipped off to the death camps. Siskind after all, does believe there will soon be death camps in America.

What Siskind also can’t explain and most of her supporters don’t want to recognize is that before she was running The New Agenda, she was a Wall Street one percenter. Specifically, she traded in something called distressed debt which ties into the hedge fund industry. That’s right. Siskind was one of the Wall Streeters that helped collapse the economy back in the 2007 and 2008 time-frame. No wonder in August 2008 she established The New Agenda.

Perhaps an enterprising someone will help us find out how much money Siskind makes via The New Agenda each year – I’d love to see those tax returns.

The New Agenda itself is naturally a Hillary Clinton surrogate organization that wraps itself in the cloth of LGBTQ rights and women’s empowerment. All of Siskind’s tin-foil-hat rhetoric then is connected to the worst candidate Democrats have run in a generation and that today is claiming she wanted to be a Reverend.

Like Hillary Clinton, The New Agenda too is a sham and so is Amy Siskind. Check her out on Twitter if you don’t believe me.